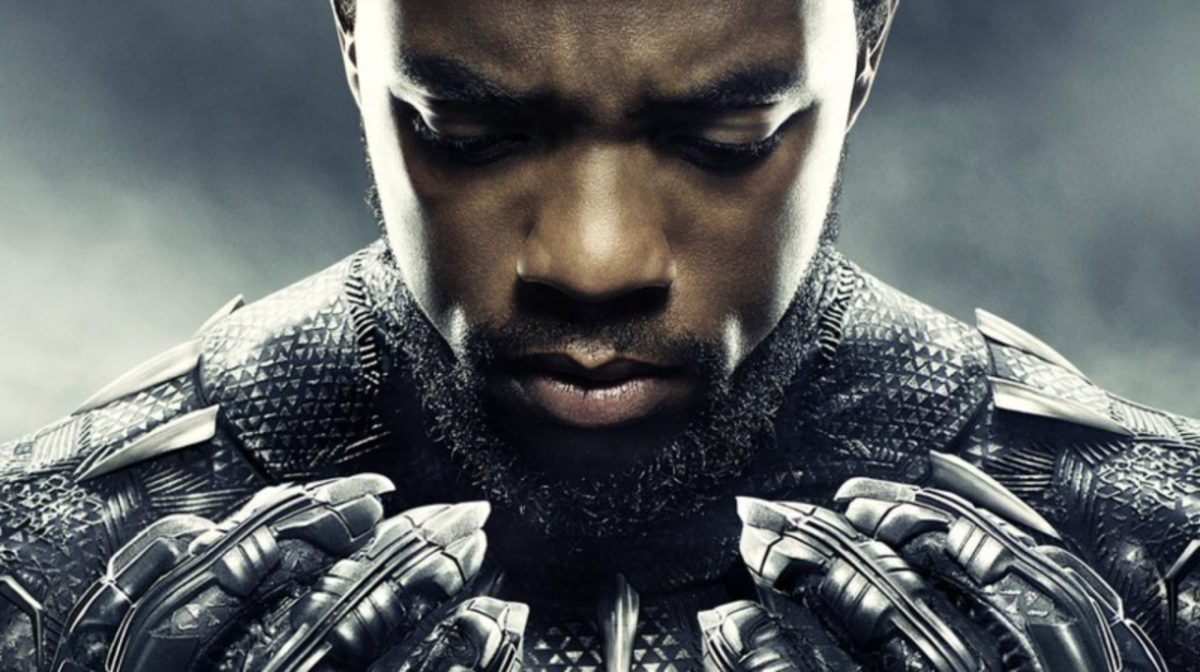 I’ve been waiting to go to see Black Panther at the movies a lifetime, not hyperbole, just straight up truth. I go with my son, and when the lights darken, and royal purple, deep blues, and dazzling reds on ebony and mahogany skin jump off the screen, I’m one of several thousand exhaling and grinning like I never see a movie or a superhero in a movie.

At the end of the movie, when the requisite flicks to come teasers fade into a million credits, and my son’s tap dancing excitedly beside me watching folk take souvenir Black Panther pics, I’m in a strange soft light afterglow. Black Panther is absolutely the best-looking film in the Marvel movie universe, the best looking among the superhero movies period. It is historically and culturally the most important and impactful superhero flick perhaps ever. It even dares to glimpse the women, Black women, as forces of physical power, skill, and scientific and technological brilliance and the latter in the figure of a Black girl who rocks.

Director-screenwriter Ryan Coogler and co-screenwriter Joe Robert Cole saw there had to be humor and that we and the Black lives matter times demand a Black Panther superhero movie that revels in being Black and proud. Hence, there is a double conscious sensitivity towards the White male presence; it tries to avoid falling prey to traditional Hollywood’s love for having a good heroic White guy taking center stage.

Meanwhile, there is a superhero fierceness so radical, hot, and revolutionary, it evidently can’t be imagined by mere mortal men dreaming up fantastic male and White female superheroes with brown hued sister soldiers but legions of us can. We see you sistas – Storm-esque and Wakandan baaadaasss sexy, strong, wise — unlikely revolutionaries come to save – I gotta a superhero fit line ready, ‘You see how long it took them to discover we are earth, they have no idea we are fire and sky.’

I am driving after dropping my son at school, double sided and writing in my head, love and disturbance. I’m tuning in and out of radio channels hoping for a song I love and haven’t heard in a while and instead:

White Guy 1:‘Just make a movie and not have an agenda, that’s all I’m sayin’ Don’t get into the race thing.

I’m pumping breaks, a bit amused but mostly not– I’m woke and get to talking back to White Guy #1 as I go through the next five lights. Superhero comics have been political centric from the beginning. Bad guys, countries at war, capitalist corruption, political ideologies in combat, genocide government control, weapons of mass destruction – Did you watch Captain America: Civil War – Winter Soldier, Any of the Avengers, Iron Man?

What you really mean is why can’t ‘Black’ Panther be less ‘Black’? Couldn’t it avoid direct or allegorical reference to topics icky to sensitive white people, including Western colonialism, exploitation, and genocide in Africa, racism, and so forth and instead deliver black folk running around in cool futuristic suits merely jousting with supernatural spears

One week later to the day of seeing the movie, I am not thinking about White guy but about how I am still paused on the page with so much on my mind about Black Panther. I am hitting the brakes, tapping the radio arrow, and it’s the same byte from sports talk to right wing to jazz to hip hop morning shows – ‘seventeen dead’ ‘assault rifle’ ‘disturbed boy’ and Black Panther is opening nationwide.

At a red light, I squeeze the steering wheel with both hands. It comes to me again how our deepest real stuff and imagination fuel superhero comics and movies. The fragility of safety, the longing for it and whether it is real and sustainable internally; whether being safe and at peace as a state of civilized being is possible for the world community – that is at the heart of the film.

Black Panther was sold before the presales even began; we already loved it upon announcement that it was getting made. It hits so terrifically on some dazzling levels that viewers will sleep on the story problems. It would have been incredible for the movie to be what it absolutely could have been – kick ass marvelous in every way.

That most basic element, the story and its development, this is where Black Panther is lesser than it should be. It is in the knitting together of the story’s details – the neglected nuances of motivation and contradiction, the missed opportunities to complicate and contradict the hell out of the choices the key and secondary characters make and why — most glaringly in the case of the dead King, T’Challa’s father, and his foe, the cousin (Michael B. Jordan). T’Challa and his long-lost cousin get no slow dance into epic battle; the pacing rushes towards the ‘big’ moments, no stroking tensions, a little waiting and intensification.

A sure-footed story could trust us to be interested in seeing what Boseman could do with T’Challa in the wilderness unstrung, weakened dramatically, having to earn his way back to be worthy to challenge. The talented Jordan’s performance as psychopath Erik Killmonger is reduced overly much to a series of angry Black Power-centric utterances. We get it logically; he’s orphaned and wronged by his dead uncle, the late King, but there is no clever character contradiction to make things emotionally messy for us to watch him, just the extreme version of angry [albeit politically enlightened] young black man as if we might not accept this cousin as a fit Black Panther villain and might question Jordan’s right to play him.

Black Panther rushes elsewhere too. Wakanda is an advanced society, superior knowledge and civilization rooted in an Afrocentric communal spiritualism. A single physical battle and a stop by the ancestors, and one is worthy to be King; No counsel of the elder women and men bothers to contemplate seriously the fate of Wakanda and the universe?

As a film, Black Panther fills a seemingly endless hole, the yearning still for dignified super baaad us on screen, but we should not perpetually ride on being invited to the party – Marvel’s or any other exclusive studio. Our legacy and cultural impact in film is no novelty now. We can get over being excited at being present, and how we take for granted how bold, diverse, and economically successful in cinema we have been and can be.

Now let’s show off the intricacies of our Afro-futuristic intellectual genius, the tunnel deep caverns of our linguistic majesty. Let our stories be brilliant from page to looks on screen and as big as our cultural imagination can hold. Let the sister-elders speak and bless, philosophize, and testify truth to power. Let us linger in the nuances of a layered story threaded through nimble, patient fingers and eyes. Black Panther is special for all the aforementioned, but better treatment of the story should follow.

S​tephane Dunn is a writer and professor and the director of the Morehouse College Cinema, Television, & Emerging Media Studies Program​ (CTEMS). Her ​publications include the 2008 book Baad Bitches & Sassy Supermamas: Black Power Action Films (U of Illinois) and a number of articles in mediums such as Ebony.com, The Atlantic, The Root.com, Bright Lights Film journal, and others. Follow her on Twitter at @DrStephaneDunn and www.stephanedunn.com