Skip to content
You are here:HomeMovies CREED II is a split decision: A review by Tim Estiloz 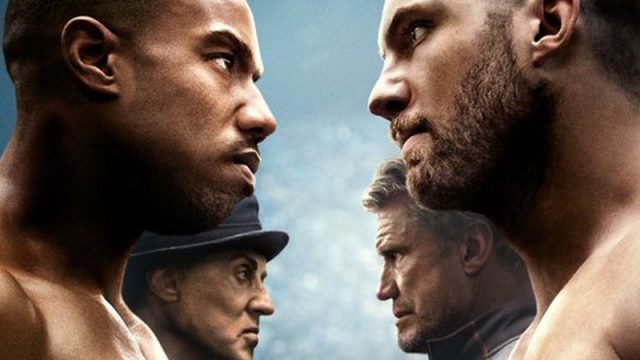 Sequels to hugely popular films always bear the burden and expectation of living up to the quality and reputation of their often superior predecessor. Such is the case for the new film “Creed II”.

The first film which shared narrative DNA with the “Rocky” film franchise excelled on its own amazing merits, thanks in large part to a wonderfully emotional screenplay, the excellent direction of Ryan Coogler and the impressive performance of star Michael B. Jordan. While the first Creed film had character roots that transitioned from Sylvester Stallone’s Rocky series; it was nevertheless its own superior film focusing on the growth of Adonis Creed as a young boxer living in the shadow of his father Apollo Creed’s stellar championship reputation.

Like that comparative father and son dynamic, “Creed II” faces a similar obstacle of overcoming and exceeding the former film’s reputation. Alas, rather than continuing its own unique narrative for the character into new territory, “Creed II” falls victim to the expected trope of avenging the death of Adonis’ father in the ring that harkens back to the Cold War era “Rocky IV”.

Fans of the “Rocky” franchise will recall that Adonis’ father Apollo Creed faced off against the Soviet menace in the form of its mountainous and grim boxing champion Ivan Drago (Dolph Lundgren). In the end, the elder Creed died in the ring from injuries sustained during his mismatched battle against Drago. Later in the film, Rocky defeats Drago in jingoistic fashion in the USSR, but still bears the guilt of honoring Apollo’s directive to not stop his own fight against Drago which resulted in his friend’s death.

Fast forward to “Creed II” where we find an aged Ivan Drago training his son Viktor (Romanian boxer Florian Munteanu) to battle Adonis to regain the long lost glory and nationwide respect the Dragos have embarrassingly been denied since Ivan’s defeat at the hands of Rocky decades earlier.

For Ivan and son Viktor, the years of disrespect and scorn by their nation and countrymen have made both men bitter and vengeful.

Therein lies both the allure and partial failure of “Creed II”. Thanks to a screenplay co-written by Sylvester Stallone, who reprises his role as Rocky and as Adonis’ trainer, nostalgia and fan service is catered to, by the idea of another Creed vs Drago confrontation complete with the elder Drago reprising several variations of his famous “I must break you” line from “Rocky IV”.

It’s admittedly a tempting plot line to explore for nostalgic feels, but not necessarily the best one.

Adonis and Viktor face off during a hastily arranged fight for the championship in which the physically dominating Drago quickly pummels Adonis into literal defeat, but Adonis still retains his crown due to a boxing etiquette technicality. The result leaves both fighters hungry for a definitive rematch.

What ultimately saves “Creed II” from becoming a complete rehash of the earlier Rocky film is the slightly deeper exploration of Adonis becoming his own man in various ways. Adonis has to cope with advancing his relationship with his girlfriend Bianca (Tessa Thompson). Both find themselves wrestling with complications of new marriage, parenthood, Bianca’s sacrificing of her own budding musical career and everyone’s ambivalence, including Rocky’s, about a rematch with the formidable Viktor Drago. However, these peripheral matters are only superficially explored, as Adonis ultimately focuses his attention on the film’s inevitable climatic rematch.

“Creed II” nevertheless works as effective entertainment thanks to the performances by its wonderful cast. Michael B. Jordan continues to show the star power and acting skill he displayed in his earlier on-screen efforts such as “Fruitvale Station” and most recently as the angry, yet ultimately sympathetic, villain Killmonger in “Black Panther”. His portrayal of Adonis Creed has layers of vulnerability and strength that are quite powerful; however, yet to be explored to their fullest potential.

Dolph Lundgren is also a strong presence in this film as a character who has evolved into something more than the one-note destruction machine from “Rocky IV”. Here, he is a slightly more sympathetic character seeking redemption for both he and his son from their homeland. Their motivation is not simply a grudge match: but also, the hope of regaining a better life denied father and son as a result of Ivan’s humiliating home turf defeat in his younger years. An unexpected cameo appearance underscores the degree of loss and exile that father and son have endured in the wake of Ivan Drago’s defeat long ago.

Sylvester Stallone’s Rocky takes a suitable partial backseat to the proceedings; but is a strong stable presence that advises and grounds Adonis when the moment is right. If this is Stallone’s final outing on screen as Rocky Balboa, it is a fitting and respectable final curtain should the Creed franchise choose to continue without him.

It should be noted that Stallone’s Rocky Balboa is a truly unique character in film iconography. One cannot think of another character in film history in which one actor literally creates and inhabits the same character’s on-screen story arc in real life time over decades. As Stallone himself has aged, endured failure and heartbreak, enjoyed success, grown mature and wiser over the decades; so too has his fictional character creation of Rocky Balboa traveled the same path in his narrative trajectory. This fictional / real life bond between actor and his own character over both their decades-long lifetimes is something truly special and a noteworthy accomplishment.

“Creed II” is an entertaining film hobbled a bit by taking the easy predictable road in its screenplay. However, it is still worth seeing for its performances and perhaps a must see for fans of the “Rocky” film franchise as well.

Once the shadow and weight of Apollo Creed’s reputation is lifted from his son’s shoulders by the closing credits; perhaps a new “Creed” franchise will find new, more spectacular stories to add to Adonis’ own legacy… rather than those rooted in the past.