Skip to content
You are here:HomeMovies FATMAN: A NEW KIND OF SANTA CLAUS IS COMIN’ TO TOWN 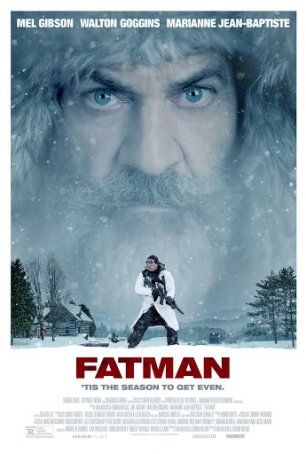 In the delightfully dark and subversive new film FATMAN, Mel Gibson gives us a thoroughly different kind of holiday Santa Claus tailor made for these cynical and troubled times we now live in. Gibson plays a scruffy, gruff and increasingly disillusioned Chris Cringle who lives in the remote snow covered town of North Peak, Alaska. It’s here where Cringle, along with his loyal crew of elves, work out of a ramshackle rural factory year round to create toys for the world’s children for Cringle / Santa Claus to deliver on Christmas Eve.

However, the toy gifting business isn’t as alluring or as profitable for Cringle as it once was. Cringle has become a cynical, whiskey-drinking, world-weary curmudgeon lamenting about how so many people have lost faith in the magic of Christmas. He’s also annoyed that there’s fewer and fewer children each year behaving good enough to merit receiving anything from Santa but a lump of coal.

Lastly, it seems the business of being Santa Claus isn’t what it used to be for Cringle’s bottom line. In FATMAN, Santa and company are a bit strapped for cash, since it seems the US Government has been financially subsidizing Cringle’s gift giving enterprise for decades to keep the Christmas spirit alive.

It seems when there’s less children worthy of being gifted; apparently that has some kind of adverse trickle down effect on the nation’s Christmas economy and the Feds threaten to cut Cringle’s’ subsidy. To save the business from going belly up, Cringle agrees to a government offer to produce some hardware for the military for a couple of months in the holiday off-season. Apparently Santa’s loyal efficient elves would’ve made great “Rosie the Riveters” back in the day.

If all this seems a bit bizarre for your standard holiday Santa Claus film, you ain’t seen nothing yet.

While Cringle is trying to keep the toy business afloat, there’s a couple of naughty – not nice characters who have an axe to grind with ol’ St. Nick. A grim assassin named Skinny Man ( Walton Goggins ) has plenty of unresolved childhood issues resulting from Santa never fulfilling his Christmas wish as a young, pre-homicidal little tyke. As a result, in between contract murders and hired shakedowns, Skinny Man spends large sums of money buying other people’s gifts from Santa. He collects and warehouses their material childhood joy to soothe the heartache of never having received that same joy from Santa himself.

Meanwhile, there’s a rich, spoiled, sociopathic 12-year-old named Billy ( Chance Hurstfield ) who lives with his doting grandmother, while the negligence of his jet-setting father only makes the kid more bitter and insufferable by the day. Billy is a boy who delights in humiliating the housekeepers with menial tasks, while angrily envying the sweet young girl classmate who fairly beats him out a First Place ribbon in the school science fair.

So of course, it make sense that Skinny Man is on Billy’s secret payroll, financed by stolen checks from grandma. In a rather unsettling scene, that only minimally skirts dark comedy, Billy has Skinny Man tie up his young classmate in his basement and threatens to shock her with electrical cables unless she admits to falsely cheating in the science fair contest so he can be awarded her First Place ribbon. The premise is so ridiculous that you’re almost tempted to smile at its absurdity; but the malevolent execution of the scene makes it effectively repulsive.

When Billy hires Skinny Man to kill – yes, murder – Santa Claus because he got a lump of coal that Christmas; both their twisted obsessions with their perceived slights by Cringle seem in sync. From here, FATMAN evolves from dark absurdity into an ultimate violent face-off at Cringle’s remote snow blanketed compound; a confrontation that’s tinged with touches of Tarantino, The Coen Brothers and a Sergio Leone spaghetti western.

One scene that depicts the odd absurdity of the arrangement between Billy and the Skinny Man is when Billy tells the killer he wants a souvenir from Cringle after he murders him. The 12-year-old wants the assassin to deliver Cringle’s actual head. Skinny Man balks at that suggestion because its too problematic and cumbersome. He also refuses Billy’s second suggestion because he has issues cutting off a dead man’s beard

They settle on bringing back Cringle’s coat as a trophy.

FATMAN works in large part because of the commitment of its principal actors. Walton Goggins  is very good and convincing as a calculating killer with a soft remorseful spot for his sad childhood.  Marianne Jean-Baptiste, portraying Cringle’s longtime supportive wife Ruth, is often a scene stealer bringing a sense of normalcy to the film’s absurdist proceedings as his emotional rock and personal cheerleader.

However, this film is Gibson’s all the way. All grit and grumpiness throughout much of this film; Gibson’s cynical Santa Claus is much more believable, relatable and far more enjoyable than the raucous vulgarity of 2003’s “Bad Santa”. There are welcome glimmers of the tough action hero that Gibson portrayed in his early career and he clearly seems to be having a ball with this character. The film direction and screenplay by brothers Eshom and Ian Nelms plays to Gibson’s dramatic strengths.

Additionally, the final half hour when “Fatman” evolves from dark dramedy into full-on action film is a sheer entertaining delight capped off by Cringle’s face to face warning to Billy. Their meeting gives new frightening meaning to the song lyric “… he sees you when you’re sleeping”.

FATMAN may not appeal to those seeking typical upbeat holiday-themed fare; but it has a uniquely twisted cynicism and originality that’s delightfully fun to watch.