Skip to content
You are here:HomeMovies Prepping for “Proud Mary” with Tales of Hitmen Past 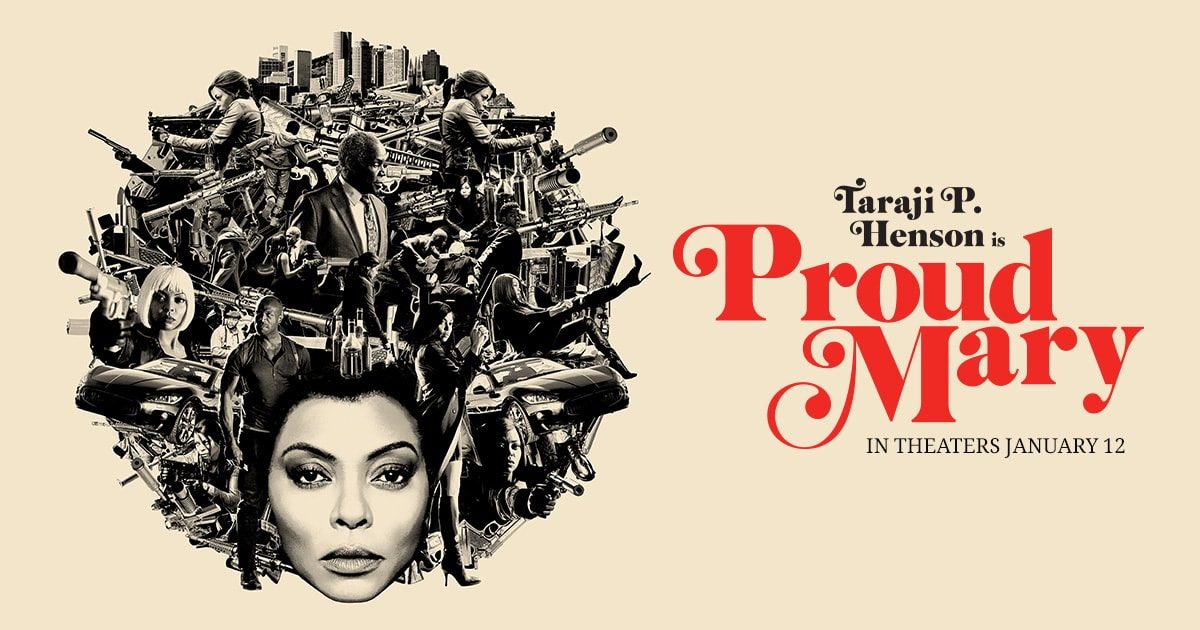 I’m preparing for Taraji P. Henson’s new flick Proud Mary. I don’t have especially high expectations for the movie in terms of it being Oscar-worthy or anything, but as a fan of a good actioner, I’m looking forward to seeing my girl flex her guns (and her weapons, too). Why shouldn’t she get to show how slick, fit, cold-blooded and butt-kicking a character she can be? We are already acquainted with Taraji’s incredible capacity for fierceness, thanks to her smoking chops in Empire. Now it’s her turn to get physical.

Angelina Jolie had her outings hefting guns bigger than her in Mr. & Mrs. Smith, Salt, and the forgotten 2008 thriller Wanted. Charlize Theron has been a badass in last year’s Atomic Blonde, Mad Max: Fury Road, the Aeon Flux series, and even 1996’s 2 Days in the Valley, where she had an epic girlfight with Teri Hatcher. Uma Thurman was not only The Bride in Kill Bill, but Emma Peel in the New Avengers, a superhero in the comedy My Super Ex Girlfriend, and Poison Ivy in Batman & Robin.

Taraji’s entry no doubt follows in the mold of numerous blaxploitation sheroes of the 70s, like Pam Grier, Teresa Graves, Gloria Hendry, Vonetta McGee, Tamara Dobson and the like. But unlike many of these ladies, whose characters were usually motivated by revenge or justice, the Proud Mary character appears to do what she does for money alone. Will have to actually watch the movie to understand her motivations and payoffs. After all, the movie is called “Proud Mary.” What makes her proud?

Proud Mary looks to be part of a long list of movies about what filmmakers imagine to be the fast-paced, high stakes, high-paying, and stylish yet lonely, complicated, desensitizing world of professional killers who must face life-and-death decisions every single day. The risks and morality of their profession make them the perfect character studies.

Aside from the more recent The Hitman’s Bodyguard, which I didn’t see (should I?), here are a handful of relatively recent yarns about tortured hit men that I found interesting:

1. Grosse Pointe Blank (1997)
A hilarious and simultaneously violent movie that manages to skewer politics, corporate career advancement, the American dream, and suburban values while asking questions about life, love, and one’s taste in music. Grosse Pointe Blank follows Martin Blank (fast-talking John Cusack), a 30something hitman undergoing a mid-career crisis. On what he plans as his last assignment, he travels back home to the Michigan city of the title where he must execute a target (only identified in a sealed dossier he delays opening) before a pair of Federal agents stops him or a team of freelance assassins led by Grocer (Dan Aykroyd) kills Blank and hits the target themselves. In the meantime, Blank decides to attend his ten-year high school reunion and resume courtship of the sweetheart (Minnie Driver) he abandoned just before prom. Throughout the film Blank has a back and forth with himself and those around him about doing what he does. “If I show up at your door, chances are you did something to bring me there,” he explains to his terrified therapist (Alan Arkin). “It’s not me! Why does everybody think it’s me?” he grouses for the millionth time about the impersonal nature of his job, while violence and mayhem rain down around him. “No, no, no, psychopaths kill for no reason, I kill for money, it’s a job!” he tries explain to his horrified girl. The jokes, jibes, and spot-on notes about modern life fly as fast as the bullets, all powered by an amiable New Wave soundtrack. One of my favorite flicks.

2. Killing Them Softly (2009)
Few people saw this elegiac crime noir starring Brad Pitt as Jackie Cogan, a Boston-based fixer charged with taking down the palookas who foolishly robbed a Mob-connected poker game. Jackie prefers to take out his victims from a distance with no warning, thus “killing them softly.” He dispatches one of the robbers himself, but since he’s personally acquainted with the other marks, he decides to sub-contract the gig to Mickey Fallon, an old-school hitman played by the late, great James Gandolfini in an incredible performance that nearly derails the whole film. Unfortunately Mickey is a wreck: A drunken, overweight parole violator just out of stir who precedes the job with drugs, alcohol and hookers and ultimately can’t perform, leaving Jackie to do what must be done. It’s a slow, atmospheric film with a lingering sense of dread enhanced by constant peeks at televised news bulletins and 2008’s presidential debates showing the grim realities of economics in America. The story has the same leisurely pace, affection for its characters, and Boston Irish accent as the much earlier The Friends of Eddie Coyle, and indeed, both films were adapted from novels by George V. Higgins (1974’s “Cogan’s Trade” in this instance). The story ends with Jackie in a bar haggling over what he’s been paid for the three hits. “F–k you, pay me!” he demands, echoing what he feels America is really all about.

3. The Professional (aka Léon) (1995)
Jean Reno plays Léon, a taciturn, illiterate and lonely hitman living in a tiny apartment in Harlem. His daily routine consists of drinking milk, exercising, cleaning his guns, and waiting for his next assignment in between executing hits around the city, while his fees are pocketed by his Little Italy-based boss “for safekeeping.” But when the family of Matilda, the precocious 12-year-old girl next door (Natalie Portman) is wiped out by a crooked, sadistic DEA lieutenant (Gary Oldman) over stolen drug money, Léon finds himself the reluctant guardian and mentor for this orphaned Lolita. As their relationship unfolds, Matilda teaches him more about life and familial love and he teaches her the tricks of his trade as a “cleaner.” Intent on avenging the deaths of her family, specifically her innocent young brother, Matilda is no match for Oldman until Léon lends a hand, dispatching bad guys in spectacular fashion.

4. Kill Bill, Vols. 1 & 2 (2003-2004)
Quentin Tarantino‘s epic tale of revenge undertaken by Uma Thurman‘s unwavering Bride (aka Beatrix Kiddo), these films give us a lot to chew on about the imagined lives of a crew of professional assassins. How all of these vindictive killers manage to stay aligned under the rule of Bill, aka The Snake Charmer, is a mystery since they all seem to be a pretty bad-tempered lot. Their Deadly Assassination Viper Squad requires them to adopt the codenames of troublesome snakes, not all of them venomous; their names seem to reflect their personalities more than their killing abilities, as the Bride becomes Black Mamba, Elle Driver is California Mountain Snake, O-Ren Ishii is Cottonmouth, Vernita Green is Copperhead, and Bill’s brother Budd is Sidewinder. We learn quite a bit about the physical training in martial arts (Camp Pai Mei, anyone?), tools of the trade (swords in this day and age!), and nerves-of-steel techniques used by these killers and their adversaries. They know martial arts, knives, guns, swords, darts, spears, poisons, languages, survival techniques, espionage and more. Who can forget Vol. 2’s pregnancy scene, with Karen Kim wielding that giant shotgun in an attempt to take out The Bride at the hotel? She was no joke, either. The thing is, when you hang with killers, you usually get killed. And in a revenge tale about a trained killer versus a bunch of trained killers, things are bound to get intense.

5. ShadowBoxer (2005)
The lives of contract killers don’t get anymore complicated than they do in this flick. Mikey (Cuba Gooding, Jr.) and his cancer-stricken stepmother Rose (Helen Mirren) are professional assassins and also lovers. Called in by a contact to kill his pregnant wife, who he suspects of cheating, the duo instead find the wife ready to give birth. They decide to help their target through labor and delivery, then spirit mother and child away to another city for safekeeping. Mikey continues to dodge the woman’s husband and carry out hits as Rose gets sicker and sicker. Then comes the scene most remember. At Rose’s request, Mikey takes his beloved on a picnic deep in the woods, makes love to her, and shoots her in the head. The film continues to show the unraveling consequences Mikey faces for harboring the wife and her son, but who cares. He killed Helen Mirren in an act of love! It’s the hit man’s way of pulling the plug. Mikey ultimately prevails to survive another day.

6. Looper (2012)
In another twisted take on the genre, this film poses the question: What is a hitman to do when the target is … himself? In this dystopian future, Joseph Gordon-Leavitt plays Joe, a member of an elite crew of live-for-today 2044 hooligans called Loopers. This assassin ring kills crime world targets from 2074, delivered back over the years via an outlawed time machine. Unfortunately being a “looper” comes with the proviso that they only get 30 years to serve until they too get looped back for execution. All hell breaks loose when Joe from 2074 (Bruce Willis) loops himself back to kill a murdering mob boss as a baby, while young Joe tries to stop him. Complicated plot, interesting premise.

So, what will Taraji bring to the genre? Can’t wait to see.