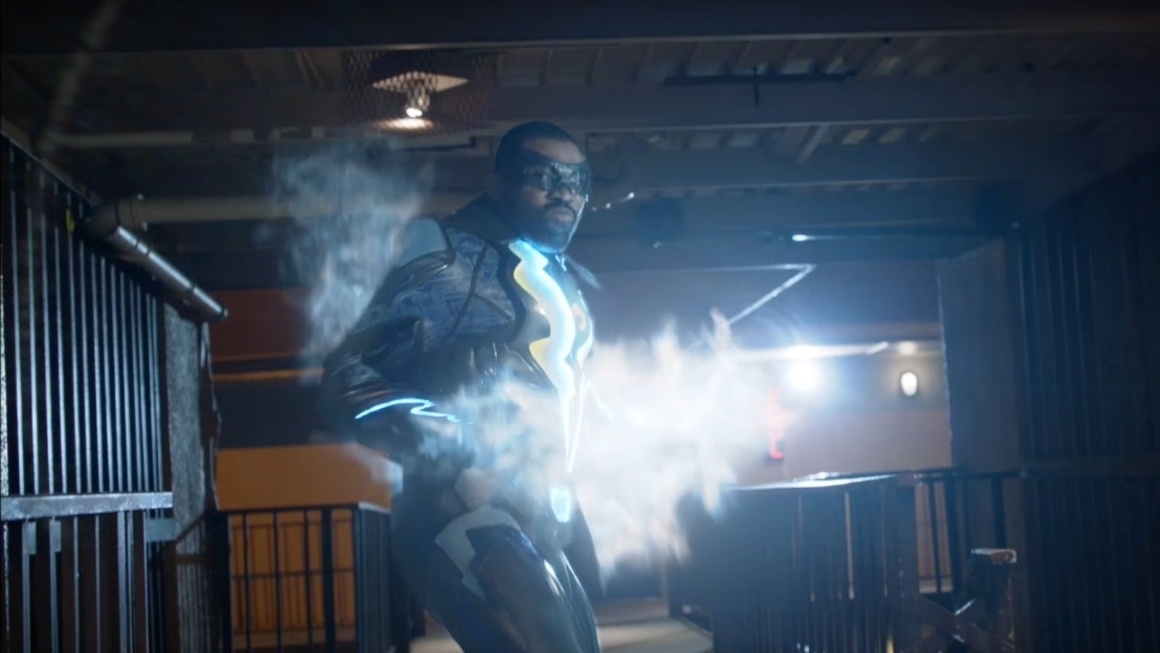 The famous quote from civil rights activist, Fannie Lou Hamer sets the tone and foreshadows the theme of the CW’s latest, most dope superhero series to date, Black Lightning. Reveling in its street-saavy blackness, the series kicks off with the premiere episode, Resurrection Scene 1. Based in the fictional city of Freeland (yup, I know but just go with it), the show begins with Jefferson Pierce (Cress Williams) waiting with his youngest daughter, Jennifer (China Anne McClain) at a police precinct. Dressed in suit and tie, they await the release of his oldest daughter Anissa Pierce (Nafessa Williams) who was apparently arrested protesting the police at a rally that apparently became violent.

Nina Simone’s ‘Strange Fruit’ continues to play as it cuts to the Pierce family driving home in the rain. Jefferson is pretty pissed at Anissa’s participation in the march quoting Martin Luther King, Jr., Anissa responds quoting Fannie Lou Hamer. With tensions already high things get real when they are pulled over by the po-po who not only ask Jefferson to step out of the vehicle but handcuff him, slam him on the hood of his car and harass his daughters. You get a sense of police profiling and targeting towards blacks is commonplace when Jefferson complains, “This is the third time this month!” Proven to be a false alarm, Jefferson is feeling some kinda way and asks white cop #1, “I’m sure you were looking for a black man dressed in a shirt and tie, driving a Volvo wagon?”  White cop #1 is not only unapologetic but a total shithole (I had to use it eventually) and Mr. Pierce was not having it. It’s the first time we see him manifest his powers. With eyes glowing, the police car’s lights go out and the vehicle stops running.

Cut to next day, Jefferson and family are attending a fund raiser at the charter school where he is the principal. While her father is making nice to the board and showing he still got wood for his ex-wife, Lynn (Christine Adams), Jennifer is changing clothes in the bathroom to sneak out and go clubbing with her BFF. Bougie-ass, “Harriet Tubman” Anissa catchers her red handed but gives her a pass as long as she’s home before he dad gets there. Well just giving a curfew already lets us know that some shit is about to go down. Plot device alert, anytime you give someone a curfew – never gonna happen … uh uh, nope.

So, Jefferson gets home and Jennifer ain’t there. Pops starts bugging like a Huxtable (too soon?) but after discovering she’s getting her swerve at the Club 100, a known gang den he knows he has to go down and handle some thangs. Meanwhile Jennifer is out getting lit, smoking some weed and having a good old time especially when Will (Dabier) rolls up on her. He’s throwing game and she slinging it back saying, “Just because I’m a little stoned, don’t think I’m gonna have sex on the club bathroom floor – or anywhere.” They were vibing until some of Will’s unnamed homies drop by and tell him LaLa wants to see him. Jennifer decides its time to bail but the fellas were not gonna let that happen. Homie takes the two to the office where LaLa (William Catlett) the club owner and gang leader awaits. Will apparently owes money and LaLa aims to collect one way or the other by pimping Jennifer out at his Seahorse Hoe-Tel.

Here’s a couple of things you should know about Jefferson Pierce. He’s smart as shit; he’s a former Olympic athlete, oh and he was a bad ass superhero back in the day who put electric-powered foot up crime’s proverbial ass before he retired nine years ago.  Well as Oprah said, “Times Up!”

Jefferson tries to take the high road but a thug gonna do what a thug gonna do. When unnamed homie #2 pulls a gun, Jefferson takes er’body down – cutting off the lights, the music then starts kicking tail. During the commotion, LaLa gets ghost and Jennifer gets away too, but when Jefferson tries to head out he’s stopped by the cops. Just when he was about to assume the position, the scene goes slo-mo and white cop #2 says, “Get your black ass on the ground,” then Tasers him. Whatever “Can’t we all just get along” feelings he had for the past few years got zapped away by the cops, and he returns the favor by frying white cop #2 and white cop #3 asses … and the police car! Cue urban hip-hop music, walk out of frame, and fade to black – Black Lightning is back!

Yeah boi, we in it now, this muthafucka is a badass … until we see him passed out on the floor of Gambi’s, a men’s taylor shop that just happens to be owned by his long-time friend Peter Gambi (James Remar). Cool points, revoked. Gambi apparently knows how to sew more than clothes as he patches his slightly battered friend up and discuss the need for BL to make a comeback in their secret lair AKA ‘Da basement?’

The next day the word on the street is Black Lightning is back, Inspector Henderson (Damon Gupton) already has an APB out for his arrest, while Roland Martin is on television asking, “Why is it when you have a black superhero, you call him a vigilante?” Again, the show keeps it at 100 and doesn’t shy away from the issues living while black. Jennifer thought she had put her crazy night behind her until Will shows up at her school and tries to holla at her. She ain’t having it and when big sis gets involved Will goes too far so she has to shut him down with a knee to the jewels and a quick body slam. Shit is about to get ugly but Jefferson diffuses the situation and sends him on his way before the cops come. Jefferson ain’t done with this so he goes to speak with LaLa about Will breaking the truce – Freeland High is off limits and he needs to get his boys in line. Well, LaLa reminds him that he runs things around here and that’s all he had to say about it.

Will is a dumbass and decides to grab some of his homies and snatch Jennifer and Anissa from school. Shit has hit fan and after a thorough tongue lashing from his buddy Inspector Henderson, his ex-wife says “Go get our girls.” That said, Black Lightning is officially out of retirement. He heads over to Gambi’s and picks up some new threads – a kevlar fighting suit with LED lightning bolts and belt buckle. Let’s hope that gets an update by season 2.

Back to the story, dumbass Will takes the girls to the Seahorse Hotel and LaLa is fucking pissed. He pistol whips Will and tells him to erase the two girls. Black Lightning is already on the scene and in one of the best choreographed, two-minute fight sequence I’ve ever seen on a CW series they blew their wad with bullets flying, thugs, kick assery, and lightning effects. BL takes no prisoners, he leaves a trail of bodies behind him as he makes his way to his daughters. When he finds them he unleashes his full wrath on Will, grabbing him with his static energy and then frying him before dropping his ass on top of a parked car. I ain’t mad Will got his, not one bit.

Black Lightning is officially back, and his nemesis, Freeland’s kingpin Tobias Whale (Marvin ‘Krondon’ Jones III) has a pretty shitty attitude about it. He thought he killed the sombitch a long time ago. Tobias blames LaLa for resurrecting Freeland’s only superhero (so far) and painfully informs him by harpooning that doo-rag-wearing asshat in the chest and letting him know this is his mess to clean up. Back home, the Pierce family tries to put yet another crazy day behind them. Ma and pa Pierce discuss things over bourbon considering this is far from over. Meanwhile, Anissa got the shakes about what happened and goes to the bathroom to wash her face? Anywho she bugs out and next thing you know she snaps the front of the sink off. Fade to black.

Stuff we need to know:
Who the hell is Gambi and why does he make super suits?
What’s going on with Anissa, and why is she never at Med School?
How bad are race relations in Freeland and is the 100 Gang the only thing BL Is going to deal with?