Skip to content
You are here:HomeFront Queen Sugar’s Aunt Vi, Tina Lifford Herself, Goes Deep with the AAFCA Roundtable 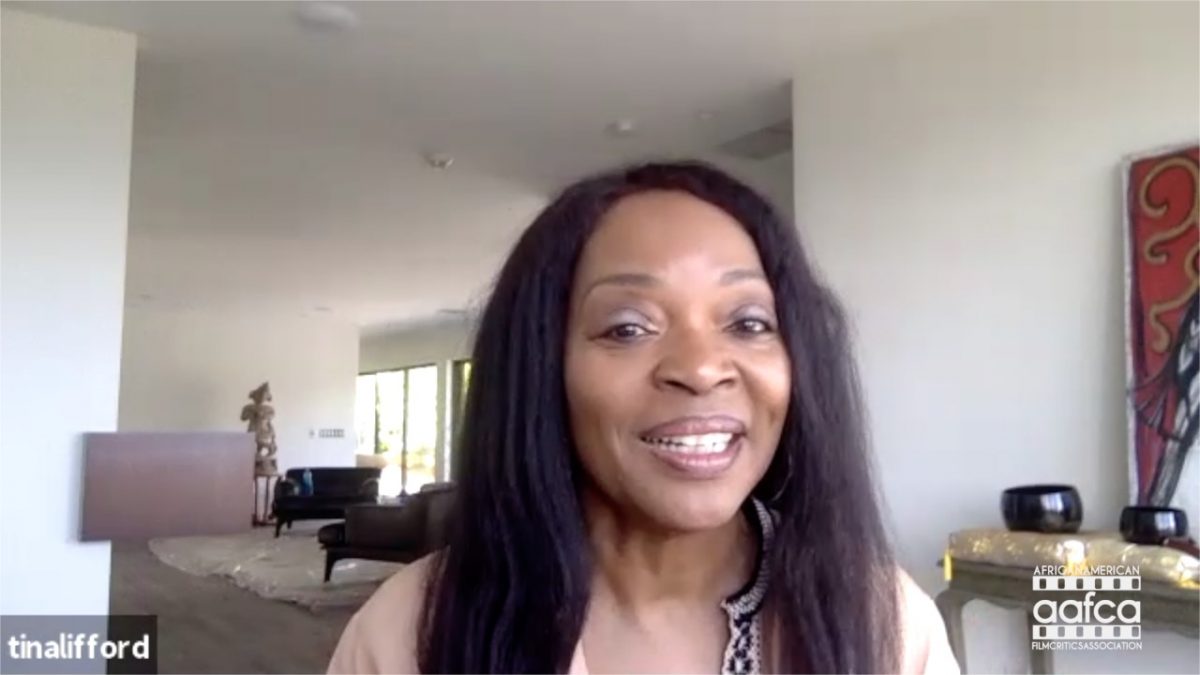 Like most of us, the coronavirus pandemic was at the top of Tina Lifford’s mind when she joined the AAFCA Roundtable last week. Lifford who plays Violet “Aunt Vi” Bordelon, better known as Aunt Vi, on the OWN hit series, “Queen Sugar,” from Ava DuVernay, shared how she left New Orleans, where they had been filming the show’s fifth season, by happenstance.

Lifford, who hails from Evanston, outside of Chicago, should have still been in New Orleans but managed to make it back to L.A. on a whim thanks to MSNBC’s Rachel Maddow. “[T]wo weeks after I had been there, she said New Orleans has the highest infection rate per capita in the nation. That was at 10 o’clock at night that I heard that on a Friday. Saturday, I packed everything. Sunday, I shipped everything. Monday, I had the cleaning lady come in and clean the apartment I was in and Monday, at three o’clock, I was on a plane.”

Though sheltered at home in L.A., Lifford made it clear that none of us were unaffected by COVID=19’s impact. “[I]f you look closely and make a few phone calls to your network, you will begin to hear stories of how the idea and the story of COVID has actually leaked into our own personal lives. I now know three people, one is a friend who’s in the hospital right this moment with COVID-19 complications, right?

Holding on to family, Lifford bragged a little on her sister, Pamela Lifford, who has been wildly successful as president of Warner Bros. Consumer Products. She also spoke of her “Inner Fitness” movement, which her book, “The Little Book of Big Lies: A Journey Into Inner Fitness,” introduces.

“It was written from true passion and the desire to help us all live and be more fully alive,” Lifford said. If we all were to tell ourselves the truth, and that’s a phrase that I use quite often, because it prompts us into a deeper, more authentic consideration. If we are to tell ourselves the truth, we each have experienced what I call hurts, dramas, traumas, upsets, and disappointments. And, you know, up until now, particularly in our culture, it has been practiced to not sort of acknowledge that as a truth or to will ourselves beyond it, or just be strong and tough it out. Our history has taught us to do that.

“The problem with that is that if in fact we take color off of these nervous systems, the truth is, is that our nervous system is always telling us the truth, and hurts dramas, traumas, upsets and disappointments that are not resolved, actually, are energy that get stuck inside of us. And that stuck energy, just imagine the power of a train, let’s say, moving through and being stuck, but the engine is not being turned off. So, you’ve got all of that metal, all of that energy that force pressing against who you are in any particular moment, with no place to go. Because that hurt drama, trauma, upset or disappointment was never fully given the time it needed to process so that the energy could move through. And so inner fitness, exactly like physical fitness, is about being able to be aware and develop the mental, emotional, and spiritual awarenesses and practices that help energy inside of our bodies constantly and consistently process itself. And it can’t do that without that being intentional. You cannot go to a gym and stand in the gym and actually have your muscles get stronger and your body stronger and more erect by just standing in the gym. There are actual physical things that you must do to support your physical strength and resilience. And that is exactly the same case when it comes to inner fitness.”

During quarantine, Lifford has teamed with Iyanla Vanzant for the podcast, “Love from a Distance with Iyanla and Tina.” Prompted by the question of “how do we support our viewing community during this time, particularly when people are finding themselves in not just emotional situations, but literal environmental situations, limitations that they aren’t prepared for, and that ignite all kinds of feelings,” Lifford said that “the intention of the show is really simple: It is let’s actually drop into a deeper voice that allows us in a community to talk about things that matter in a way that is more heartfelt and substantive.”

On “Queen Sugar,” viewers have seen this at work in Aunt Vi’s life and that has especially helped change how Black women of “a certain age” are viewed. This past season, Vi, who also battles lupus, demonstrated Lifford’s “inner fitness” by confronting the scars left by her relationship with her abusive ex-husband Jimmy Dale, played by David Alan Grier. Throughout the story arc, viewers witness Aunt Vi not only coming to terms with the relationship, but also setting important boundaries, particularly with her niece Nova, to get there.

“Vi did not have boundaries when she was with Jimmy Dale. That was one of the things she was robbed of, and not just robbed by him,” Lifford explained. “She was robbed because she didn’t give herself boundaries. She was very, very mad with herself for having allowed Jimmy Dale to be in her life for as long as he was in her life and succumbing to the kind of pain and disrespect that he costs. So, she was mad at herself.”

Lifford went on to connect those feelings to Vi’s overall health and to Nova. “I do think that the immune system definitely is impacted by, again, internal experiences, the internal resentments, the hatred against self, the feeling of abuse and then heaping that onto ourselves over and over and over again, it weakens us,” Lifford explained. “On the inner fitness side, it is so important for us to realize that we are holistic beings. Our experiences don’t live in isolation; they live in every cell of our body. And we must be aware of that and do what Aunt Vi began to do, which is to take care of herself and one of the starting places was boundaries. And, yes, you know, she loves Nova. But, in that moment, Nova broke something. And Aunt Vi’s only way of managing through that was to give distance to that kind of disrespect.”

Lifford is also happy to share the lessons of inner fitness in real life. Last year, she shared that in an all-day gathering titled “Tina Lifford’s Inner Fitness|Outer Beauty Tour.” And, currently, during quarantine, people can join her online at tinalifford.com for zoom workouts and Wellness Wednesday sessions.

Even during a pandemic, Lifford shows no signs of slowing down. “I’ve got the idea that my entire life is just getting started and that the possibilities that exists for me are actually greater than the ones that I conceived back when I was conceiving my career initially,” she said. “I’m here for the long haul, having fun, playing full out, being me and knowing that that’s exactly how to get there.”

Hear from Tina Lifford herself on the AAFCA YouTube Channel!