Skip to content
You are here:HomeFront CHADWICK BOSEMAN REMEMBERANCE – Written by TIM ESTILOZ 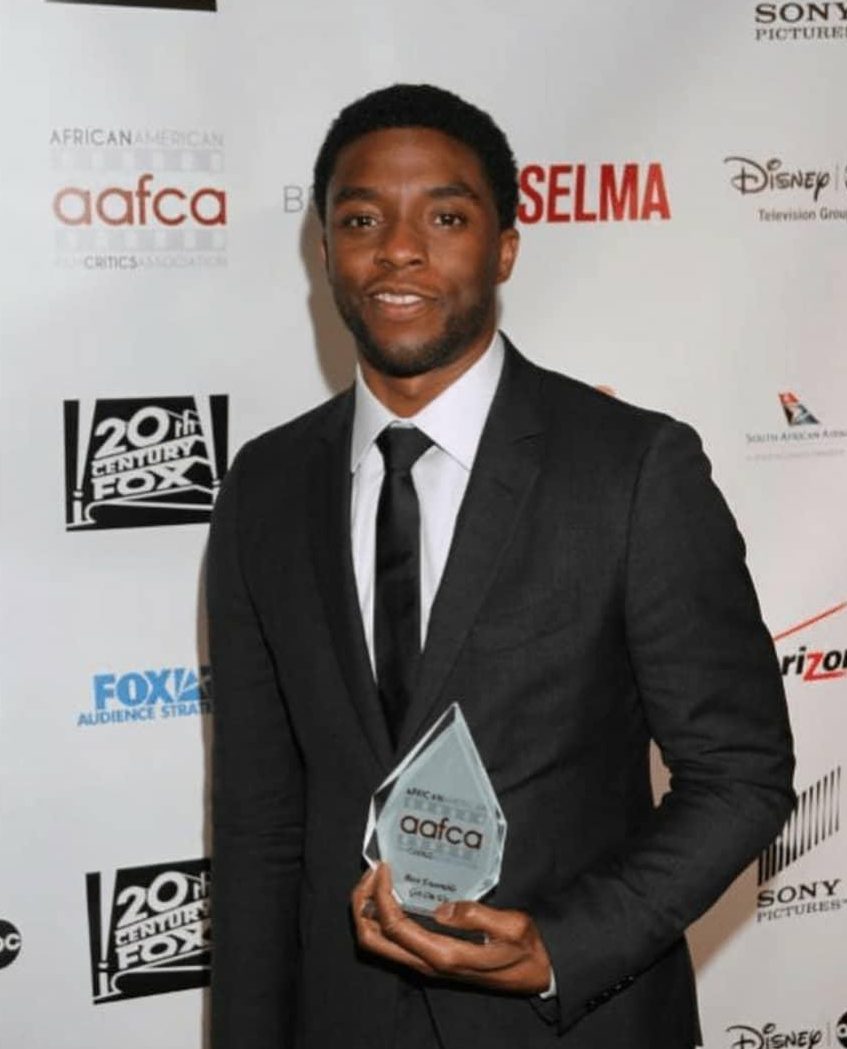 In a year where the Black Americans are crying out for racial justice and reform in a fashion and in numbers unprecedented since the peak of the 1960’s Civil Rights movement; one of Black Hollywood’s stellar young stars has been dimmed in a tragic and publicly most unexpected way.

At a time when Black Americans are mourning the loss of countless, mostly unknown, African-American men via ways most unjust and dark; one of Hollywood’s most talented actors whose portrayals of more famous and honored African-American icons brought justice, pride and light to their memory, has now left us all with only the wonderful memory of his on-screen work.

Chadwick Boseman was only 43 years old. However, within that relatively short span of time, he brought to vivid life the unforgettable persona, the vibrant charisma and the quiet, rock solid resolve and pride of such Black legends such as Jackie Robinson, Thurgood Marshall and James Brown.

However, it was Boseman’s debut portrayal as the Wakandan king, T’Challa; more famously known as Black Panther, in the 2018 film of the same name ( directed by Ryan Coogler ) that not only brought Boseman international fame; but also, via the fictional Marvel Comics’ character, brought an unprecedented cultural eruption of pride for children and adults of color when such heroic, larger than life representations of black characters had been far too rare in film.

The shout of “Wakanda Forever” from the film became a rallying cry of cultural strength, pride and resilience in the face of daunting opposition, both fictional and in real life. Boseman’s solid portrayal of the African prince and later king of a strong, self sufficient and supreme technologically advanced civilization populated by proud African people on the continent was a worldwide revelation.

Boseman passed away Friday at his home in Los Angeles surrounded by his wife and family after succumbing to a long, hard fought battle with stage IV colon cancer. Though Boseman received his cancer diagnosis in 2016, he chose to keep the news private from the public.

With a courage, dignity and resolve befitting several of his most iconic characters; Boseman continued to work, despite his illness, on such films as the recently released Spike Lee joint, “Da 5 Bloods” and “Marshall”; as well as “Black Panther” and his multiple appearances in the subsequent Marvel Cinematic Universe films in “The Avengers” saga and much more.

Despite simultaneously undergoing numerous surgeries and rounds of chemotherapy, Boseman insisted on continuing to work. Clearly, his devotion to his craft was on a superb level of commitment and inner strength, as news of Boseman’s condition and illness was not only a surprise to his audience; but also, a testament to the resolve he brought to never let his private personal struggle show nor diminish his performances.

Boseman was born in Anderson, South Carolina and eventually graduated from Howard University in 2000 with a strong desire to act. He began his career in Hollywood with roles on such TV shows as “Lincoln Heights’ and “Persons Unknown”.

However, it was in the 2013 film “42”, directed by Brian Helgeland, that Boseman rose to initial prominence in the lead role of Brooklyn Dodger and trailblazing baseball legend Jackie Robinson. Boseman received positive reviews for his portrayal of Robinson, including from Robinson’s widow, who praised both Boseman’s portrayal of the quiet strength reminiscent of her husband and also the film’s authenticity.

It’s somehow poignant and fitting that Boseman passed away on the day that Major League Baseball celebrates Jackie Robinson Day.

Boseman’s subsequent biographical role as music legend James Brown in 2014’s “Get On Up” was, what should have been, a star-making turn as the superbly talented but troubled singer, with a performance filled with raw energy, anger and charisma that was surpassed in intensity only by the real life original. The film, directed by Tate Taylor, told Brown’s life story in an unusual non-linear narrative fashion, often breaking the fourth wall as Brown’s life events unfold on-screen.

Boseman’s performance as Brown is searingly electric and it’s a crime he did not receive an Oscar nomination for this film.

2017’s “Marshall”, directed by Reginald Hudlin, again added Boseman’s skill at bringing a simmering understated passion and resolve to his resume of portraying real life characters. As Supreme Court Justice Thurgood Marshall, Boseman portrays Marshall during his early days in 1940 as an NAACP lawyer traveling the country defending people of color wrongly accused of their alleged crime on the basis of prejudice. In the film, Boseman’s Thurgood Marshall defends a black chauffeur accused of raping his white employer in Connecticut. While the film was challenged by the relatives of one of the film’s key characters for its accuracy; Boseman’s strong performance was a standout above the narrative controversy.

It was in 2016 that Boseman received the role that would ultimately make him an international household name. The actor received the call that he was given the coveted role of the fictional but heroic African Wakandan king, T’Challa for the Marvel film “Captain America: Civil War”. The part would introduce the long awaited and highly anticipated Black Panther to audiences in the ongoing Avengers saga.

Boseman had said he learned he had been offered the role by directors Anthony and Joe Russo while on a red carpet in Zurich promoting “Get On Up”. That news and introductory role in “Captain America: Civil War” would eventually reward Boseman with the lead role in his own standalone film “Black Panther”.

The film would become a cultural touchstone for the Black community worldwide and go on to earn an astonishing $1.3 billion dollars globally and smashed the Hollywood assumption that Black-led films could not perform well internationally.

Boseman was immensely proud of this role, once telling a USA Today reporter in 2018, “This experience is an opening for people’s consciousness. Their boundaries should be shaken and moved. There’s a hero here that I hope people grow to love”.

Indeed, Marvel is undoubtedly faced with the decision to recast Boseman’s role for future installments of the Black Panther franchise. However, it is truly hard to fathom how another actor can easily replace the worldwide impact and regal elegance that Boseman’s portrayal brought to this now iconic character in such a short amount of time.

In a statement issued by Kevin Feige, the president of Marvel Studios that produced all the films that featured Boseman in the role of T’Challa / Black Panther, Feige stated, “He was our T’Challa, and our dear friend”.

Feige added, “Each time he stepped on set, he radiated charisma and joy, and each time he appeared on screen, he created something truly indelible. He embodied a lot of great people in his work, and nobody was better in bringing great men to life. He was as smart and kind and powerful and strong as any person he portrayed. Now he takes his place alongside them as an icon for the ages.”

To the end, Boseman’s creative drive astoundingly and bravely surmounted the inner health challenge raging within his body. He completed his first job as a producer ( and star ) in last year’s action thriller “21 Bridges”. Boseman also had a pivotal supporting role in Spike Lee’s 2020 Netflix film “Da 5 Bloods”. Though his part as the deceased leader of a unit of Black soldiers in Vietnam is a small one, it once again demonstrates the actor’s skill at bringing a riveting charisma to whatever character he undertook as an actor.

Gil Robertson, president of the African American Film Critics Association stated upon learning of Boseman’s death, “Chadwick Boseman embodied the timeless characteristics of the characters he played, that we all want to follow.” Robertson added, “He had this integrity. He did it with class. He did it without drama. You never heard anything bad or negative about Chadwick Boseman. He carried this positive energy.”

Boseman’s final role will be in Netflix’s upcoming “Ma Rainey’s Black Bottom” as a trumpeter alongside Viola Davis who portrays a blues singer set during the 1920’s.

While Chadwick Boseman’s career in Hollywood was relatively brief by normal standards, he leaves an indelible and unforgettable body of impressive work by skillfully portraying the true essence of iconic characters on-screen.

Like the real life characters he played, like the Wakandan chant of solidarity and pride for which he is so identified with; the film work of Chadwick Boseman will indeed endure forever.