Skip to content
You are here:HomeFront The Forty-Year-Old Version Review: Come In 40. Have a Seat. 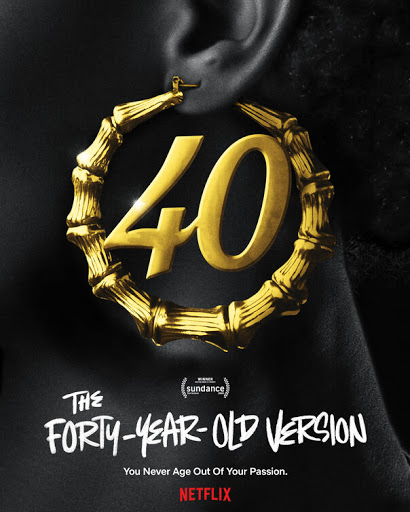 Veteran performer and writer Radha Blank’s feature directorial debut, The Forty-Year-Old Version, produced by Lena Waithe, is now on Netflix. Blank—a native New Yorker, known for her plays HappyFlowerNail, Casket Sharp, Nannyland and SEED, as well as her writers room contributions to the Netflix shows The Get Down and She’s Gotta Have It and Fox’s Empire—mines her own life for the comedic film.

It’s easy to see why Blank won Sundance’s US directing prize earlier this year. Her use of mirror reflection, angles, camera motion and natural lighting are nothing less than genius. The film’s cinematography is also outstanding. Though filmed primarily in black and white, Blank gives her audience a glimpse of color periodically in the film, particularly in memories like flashbacks of her childhood and at the film’s end.

Blank is a natural at acting and is supported by a great mix of newcomers and experienced actors and actresses who also help carry the film. The New York City backdrop, another character in the film, allows for a bevy of cameos from entertaining neighbors as well as some of the best hip-hop artists the world has ever seen. With appearances from Styles P, Babs Bunny, Young MA, Shooney Da Rapper, Ms. Fit, Miss Understood and Norma Bayts sprinkled throughout the film, Blank’s love for hip-hop is obvious. And so is her love for New York City, especially Harlem. Art and music are definitely strong co-stars.

The Forty-Year-Old Version is amusing, witty and smart. Blank’s performance is genuine, funny and relatable, easily connecting her to the audience. Radha’s rash and impulsive decisions create intense moments. Viewers go on an emotional journey with her: we mourn the loss of her mother with her. We celebrate as she overcomes her fears. We laugh at her quirky ways and we relish in her accomplishments, mainly because we see ourselves in her.

For much of the movie, Radha’s conflicted, as most of us are in life, but, ultimately, she finds her voice, taking us along for this emotional whirlwind. The Forty-Year-Old Version is absolutely one of the best films I’ve seen this year.