Skip to content
You are here:HomeFront Godzilla vs. Kong: Let’s Get Ready To Rumble ! 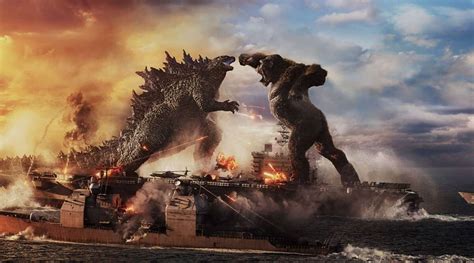 by Tim Estiloz
The biggest heavyweight championship battle of all time won’t be seen from a neon-lit Vegas boxing ring. However, it most assuredly will be the best “pay-per-view” fight you’ll see this year, either from home or better yet, in a socially-distanced movie theater.

“Godzilla vs. Kong” is a fun, albeit narratively flawed, and visually fantastic cinematic blockbuster that many folks have been eagerly anticipating for months, if not years. After an excruciatingly long 2020 home and business lockdown filled with films that many people, as great as many of those films were, never saw; “Godzilla vs. Kong” offers up a delightfully silly but entertaining action film with two central stars that the entire world recognizes immediately and anxiously wants to see go claw to paw.

Continuing the MonsterVerse path laid by 2017’s “Kong: Skull Island” and 2019’s “Godzilla: King of the Monsters”, this newest installment in the Kaiju-fueled franchise finally brings the trilogy’s two biggest players together for their long-awaited and inevitable face-off.  Director Adam Wingard manages to take a slightly laborious and labyrinthine story ( written by Eric Pearson and Max Borenstein ) with perhaps a few too many human characters, and still create a film that is entertaining for the most part at 113 minutes, especially when its two gigantic adversaries are on screen. Wingard knows who and what the audience is here to see in this film, and “Godzilla vs. Kong” most assuredly does not disappoint when the titanic payoff comes due.

Picking up not long after the events of “Godzilla: King of the Monsters”, Kong is now unhappily but humanely imprisoned within an enormous artificial habitat resembling his home on Skull Island. This mammoth domed preserve is under the supervision of the previous film’s US government monster research organization Monarch. Dr. Ilene Andrews ( Rebecca Hall ) is a sympathetic Monarch anthropologist who is observing Kong and feels the gigantic ape is growing increasingly dissatisfied inside his artificial habitat.

The only one who seems to have true and mutually empathetic connection with Kong is Dr. Andrews presumably adopted child Jia ( superbly played by young newcomer Kaylee Hottle ). Jia is an orphaned and deaf Iwi girl who was rescued on Skull Island by Kong and who communicates with him via sign language. The interactions between Jia and Kong provide some of the film’s most poignant moments amid the CGI bombast. It’s also a testament to the film’s CGI effects technicians who skillfully imbue Kong’s facial expressions during these emotional interactions with Jia with near human like characteristics.

Meanwhile, Godzilla is assumed to have formed a protective alliance with mankind since the last film’s conclusion three years prior. However, when Godzilla is awakened to suddenly and inexplicably attack and destroy a Florida-based installation for the Apex cybernetics corporation, resulting in several fatal casualties, Mankind is on alert that the giant reptile may once again be its enemy. Godzilla’s newest rampage also spells danger for Kong as the two are mortal enemies destined to eventually meet.

But, here is where screenwriters Pearson and Borenstein begin to muck up the waters in the storyline. One subplot involves teenager Madison Russell ( Milly Bobby Brown, a holdover from the previous film ) and her nerdy friend Josh ( Julian Dennison ). The two kids try to connect with a fast-talking, conspiracy touting podcast host, Bernie Hayes ( Brian Tyree Henry ) who they believe can help them with Madison’s suspicions that Godzilla is being provoked by nefarious forces. Coincidentally, Bernie fancies himself a corporate whistleblower who also suspects something devious is taking place with his employers at Apex.

At the same time, Apex CEO Walter Simmons ( Demian Bichir ) and his technical associate Ren Serizawa ( Shun Oguri ) are conjuring up a scheme that includes experiments aimed at creating a formidable adversary to defeat the Titans on Earth, including Godzilla and Kong. To achieve this goal, the unscrupulous Simmons needs to harness a mammoth power source located in Hollow Earth, a prehistoric world located at the deep core of the planet where Kong, Godzilla and all the other monsters originated eons ago.

Simmons recruits geologist Dr. Nathan Lind ( Alexander Skarsgard ) who’s fantastic theories about the existence of Hollow Earth have garnered him some disdain and skepticism among his colleagues. Simmons believes Lind can guide

a crew of APEX personnel to Hollow Earth to tap the power source he desperately needs.
As I mentioned earlier, “Godzilla vs. Kong” has simply far too many subplots and secondary characters to make the actual story interesting by itself, let alone easily fathomable without concentrating far too hard to follow. The storyline just has too many balls being juggled in the air at one time.

Eventually though, all the subplots and characters converge in Hong Kong for the film’s explosive main event between the two gargantuan contenders on the film’s title card; and one wild card thrown in that will be a welcome delight for die-hard fans of the Godzilla films from the past.

Despite an abundance of cast members; the performances from the actors are just serviceable enough to advance the rather ho-hum human plot line until the the big lizard and a mammoth monkey go toe to toe. Newcomer Kaylee Hottle does distinguish herself from the cast with a sweet and beguiling presence. Her connection with Kong offers the only true moments of emotion within the film.

Damian Bichir is a standout as APEX’s slick, manipulative and crafty corporate kingpin with a penchant for sharp clothing and an ever present glass of expensive scotch in hand.

Brian Tyree Henry is supposed to offer up comic relief as the conspiratorial-minded corporate whistleblower; but his antics tend to wear thin quickly. I liked this fast talking characterization better when it was played by Michael Pena in Marvel’s Ant-Man films.

Kyle Chandler returns as Madison’s father in this film, but both he and actress Eiza Gonzalez as Simmons’ frowning, cold-hearted daughter and corporate enforcer are truly a waste of screen time for the barely minimal contribution they make to this film.

Ultimately, the true saving grace in “Godzilla vs. King Kong” are the spectacular CGI battles between the two onscreen. Unlike previous films in this franchise, it’s wonderful to see these battles taking place in the light of day rather than obscured at night or in the rain to perhaps veil any imperfections in the CGI process. The first face-off between Godzilla and Kong is a wonderfully staged battle at sea where the two giants are using a fleet of Navy ships and aircraft carriers as literal stepping stones on the water. It sounds ridiculous on paper, but director Wingard pulls off this sequence off with surprisingly effective and exciting results.The fight choreography is indeed stellar both above the water and below.

Kong’s return to his home in Hollow Earth for the first time in perhaps centuries is equally stunning visually; providing both fantastic vistas that are, again. quite literally turned upside down, and a few dangerous prehistoric flying creatures that should know better than to cross Kong when he’s angry. The sheer over the top audacity to show Kong rip the head off of one of these gigantic creatures, and then use that head as a living goblet from which Kong slurps down its contents like a scaly 7-Eleven Big Gulp is hysterically jaw dropping.
The on-screen CGI action and detail in this film looks spectacular on the big screen or IMAX, if you so choose to screen it in theaters.

“Godzilla vs. Kong” doesn’t pretend to offer anything more of substance than what its championship title card suggests. Arguably, perhaps this film should offer up more than an excuse for a CGI extravaganza. There are many contemporary themes the film could’ve touched on; just as the original 1954 “Godzilla” reflected the fears and dangers that faced the world following the dropping of the atomic bomb on Hiroshima only nine years earlier, sparking widespread concerns about the dawning Atomic Age.

However, its the myriad subsequent on-screen incarnations in the Godzilla franchise produced since the 1960’s that maintain a special place in many people’s childhood consciousness. A time when a guy in a silly looking rubber suit could trash a model city in these cheesy movies and we as kids would be spellbound by the manufactured spectacle.
… Plot ?… Who needs a plot ?

We just wanna’ see Godzilla fight King Kong. And, this time around, there’s a definitive winner once and for all.