Skip to content
You are here:HomeFront IN THE HEIGHTS SOARS IN SPECTACULAR FASHION 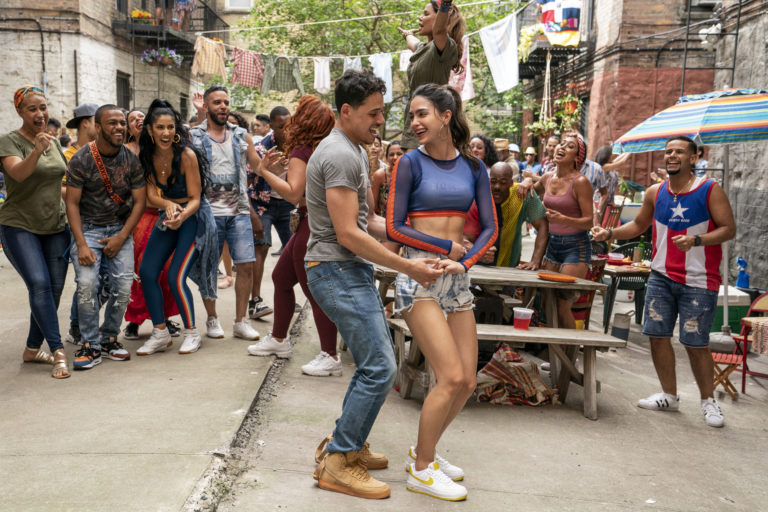 “In The Heights” is a truly spectacular and rousingly entertaining celebration of Latin culture, family love and strong neighborhood roots as told through the eyes and experiences of the close-knit residents of Washington Heights. Based on the Tony-winning Broadway musical written by Lin-Manuel Miranda, the film finally debuts after a full-year delay as a result of the COVID pandemic lockdown.

However, the joy and delightfully uplifting exuberance of “In The Heights” proves itself to be the perfect remedy for us all after experiencing such a profoundly difficult year since 2020. Director Jon M. Chu, who guided audiences through a somewhat similar celebration of ethnic culture and relationships in the hugely successful “Crazy Rich Asians”, adds an amazing mix of spectacularly choreographed song and dance sequences to weave together the story of several neighborhood residents’ and their aspirations.

Director Chu skillfully takes the story from the confining limits of the Broadway stage and expertly expands it onto the big screen to create a riveting landscape of color, brilliant choreography and song that captures the joyful colors and spirit of the neighborhood amid a sweltering summer heat wave.

The overall thematic arc of “In The Heights” is its intimate focus on a group of residents, all in desperate search of the fulfillment of their little dream, their “Suenito”.

The audience is first introduced to Usnavi ( Anthony Ramos ), a Dominican bodega owner with dreams of restoring his family’s hurricane-damaged small business and home back on the island. In the film’s delightful opening sequence, Usnavi details his backstory ( and others ) amid a superbly choreographed collage of his neighborhood slowly awakening to a new day.

Helping Usnavi run the bodega that he inherited from his father is his adopted abuela, Claudia ( Olga Merediz ) with whom he also lives. The Cuban-born Claudia supports Usnavi’s dream while also serving as a sort of surrogate grandmother to much of the entire neighborhood. Also lending an assist in the bodega’s operation is Usnavi’s younger cousin Sonny ( Gregory Diaz IV ).

Usnavi is attracted to Vanessa ( Melissa Barrera ), an aspiring fashion designer who dreams of success and a new apartment outside of the neighborhood, but finds her aspirations financially hampered. Usnavi wants to ask Vanessa out for a date but is too shy. That is, until his confident young cousin Sonny lends an unexpected hand.
Across the street, Kevin Rosario ( Jimmy Smits ) owns and operates a car service while trying to stave off gentrification that threatens his business and the neighborhood. Kevin is also working hard while leveraging his business to afford putting his daughter Nina ( Leslie Grace ) through Stanford. Unbeknownst to her father, Nina plans to drop out feeling disconnected from both Stanford and her neighborhood. Meanwhile, there’s a rekindled romance between Nina and her father’s dispatcher employee, Benny ( Corey Hawkins ).

Throughout the film, each of these characters and others interact in the pursuit of their valued personal or professional suenito. “In The Heights” superbly highlights their journey in a variety of spectacularly staged musical set pieces that are a colorful delight to the eye and ear.

The music covers a wide spectrum of styles; from Latin rhythms, rap and hip-hop to powerful ballads from the original production. “No Me Diga” is a hilarious, expertly staged sequence performed by the ladies at the neighborhood styling salon; while later, Claudia belts out a show-stopping “Paciencia Y Fe” as a powerful ode to her Cuban-born mother’s struggles and perseverance as an immigrant.

The upbeat song “96,000” about everyone’s dreams of hitting the lottery is a full on Old Hollywood style production number set at the neighborhood municipal swimming pool with an urban flavor. Filled with amazing aquatic and poolside choreography and song; the segment has all the excitement and visual style of an old Busby Berkeley in a modern day setting.

Most importantly, the heart of “In The Heights” is its devotion to a lovingly familiar depiction of everyday Hispanic neighborhood and family life. There’s the man selling piraguas on a hot summer day or a family dinner gathering at Abuela Claudia’s apartment with everyone serving themselves from the stove onto their plates while laughing in shared celebration.

“In The Heights” is an amazing film that not only celebrates our diverse Latino experience; but also, wonderfully demonstrates that we all share the same human dreams.