Skip to content
You are here:HomeFront ONE NIGHT IN MIAMI : REGINA KING’S IMPRESSIVE DIRECTORIAL DEBUT 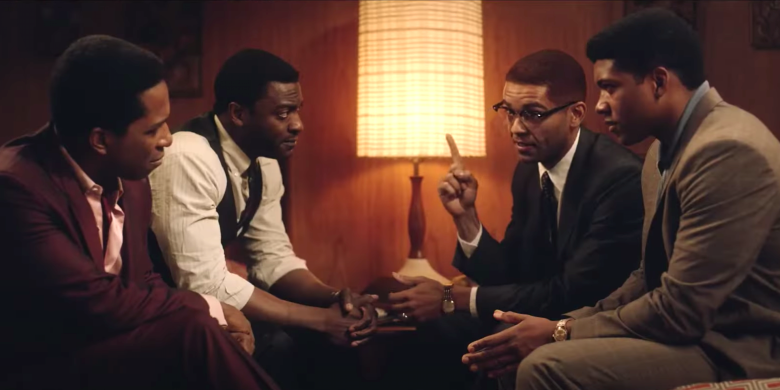 Each of these four iconic Black men were on the cusp of profound reflection and change in their personal and professional lives. Clay is about to publicly announce his conversion to the Muslim faith as a follower of Elijah Muhammad. Malcolm X has been instrumental in leading Clay to this conversion; while himself wrestling with his own doubts about the Nation of Islam and its spiritual leader.

Jim Brown is about to announce he’s leaving his successful NFL career behind to pursue an acting career in Hollywood. Meanwhile, before the night is out, singer Sam Cooke will have his popularity and success as a performer challenged as not doing more to socially advance the Civil Rights Movement through his craft.

“One Night In Miami” brings these four friends together for an intimate night to celebrate Clay’s championship victory. In a screenplay written by Kemp Powers, who adapted his play of the same name for the film, “One Night In Miami” takes this real life group gathering and proposes an intriguing “what-if” scenario about their meeting in a motel room where their friendship is not only celebrated and enjoyed; but also, tested, challenged and raw truths and opinions are laid bare.

The result is a riveting exploration of these very public figures who are able relax and simply be themselves in the company of one another with humor, camaraderie and ultimately a revealing and sometimes uncomfortable candor.

In the film, Clay proclaims the quartet is “young, black, righteous, unapologetic, famous” However, in the opening moments, director King shows us scenes that reveal despite these characters’ public success and popularity; they are still subject and victim to the prejudice and racism of the day ever present to diminish their stature as men.

Cooke is shown entertaining an unenthusiastic all-white audience at the popular Copacabana Club with a rendition of the song “Tammy” that leaves the crowd cold and dismissive. One audience member whispers derisively “I liked it so much better when Debbie Reynolds sang it”. The embarrassing silence hammers home the point that Cooke, no matter how popular he is, there are some places where he still won’t be accepted.

Meanwhile, Brown arrives in his flashy new car at the former plantation home of a white family friend in Georgia. The friend ( in a great cameo by Beau Bridges ) lavishes words of flattery, praise and pride on Brown about his athletic accomplishments; only to then non-chalantly use the N-word to casually remind Brown about the limitations of his place on the property.

Within the claustrophobic confines of the film’s hotel room setting, the four friends light playful banter eventually becomes serious and direct, especially between Cooke and Malcolm X. The two men verbally spar over the issues of Black Power and the necessity to further the cause through militancy versus the value of black artists trying to gain crossover success and approval from white mainstream audiences.

An arguably self-righteous Malcolm X chides Cooke for not writing and singing more substantive protest songs to advance the Civil Rights Movement that is gaining momentum nationwide. Malcolm X suggests the song “Blowin’ In The Wind” written and sung by a white Bob Dylan is more powerful and more relevant than any of Cooke’s commercially viable mainstream tunes. However, Cooke counters he too is working against the white power structure through self empowerment. Indeed, Cooke was one of the first Black artists to create his own independent record label and helped other Black artists to gain significant financial success.

There is a tragic irony that hangs over the pointed conversation between these two characters about their desire for future substantive contributions to the movement. Shortly after writing his own powerfully memorable protest song “A Change Is Gonna’ Come”, Cooke will die within the year during a tragic shooting incident in a motel. The next year, Malcolm X will be assassinated before giving a speech after breaking away from the Nation of Islam.

The dialogue between these four characters is sharp, funny, direct and wonderfully thought-provoking about their place within the Civil Rights struggle. Brown is not above pointing out Malcolm’s own privilege as a fair-skinned Black man by stating during an exchange with his friend that “we are all far from the same”.

Eli Goree brings Cassius Clay to vibrant light with a performance that perfectly captures the celebrated boxer’s charisma, playfulness and immediately identifiable vocal cadence with appropriate subtlety while avoiding parody. Leslie Odom Jr. is a standout as a powerfully self assured young man confident in his ability and contributions via his performing craft. Odom Jr. delivers some amazing vocal renditions, most notably Cooke’s signature “A Change Is Gonna’ Come” which is perhaps a fitting anthem for the characters within this film.

Aldis Hodge brings a quiet strength to his portrayal of Brown, imbuing the character as sort of a wise elder referee to the verbal fireworks that ignite during the evening. Kingsley Ben-Adir brings a combination of fragile vulnerability and powerful conviction of purpose to his portrayal of Malcolm X. His portrayal presents a man who urgently believes he has much yet to accomplish while also knowing his time to do so may be short-lived.

Skillfully bringing out the best in this ensemble is Regina King’s direction. She never allows the performances of these incredible actors to overshadow one another. Rather, she fluidly orchestrates their interaction into a mutually complementary masterpiece.

“One Night In Miami” is a delightfully compelling examination of the lives of four African-American icons at a personal crossroads; who nevertheless left an indelible unforgettable legacy during a key time in the struggle for civil rights.