Skip to content
You are here:HomeFront Q & A: The cast of ‘Crazy Rich Asians’ 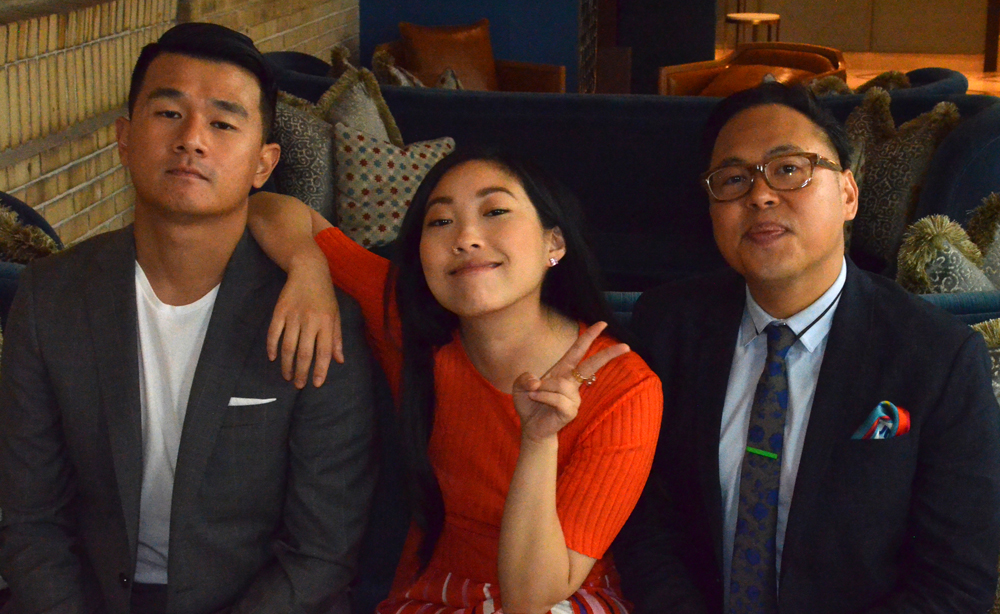 Based on the international best selling novel by Kevin Kwan, “Crazy Rich Asians” is a romantic comedy that follows a young couple Rachel (Constance Wu) and Nick (Henry Golding) when they travel to Singapore for the wedding of Nick’s best friend. Rachel has no idea her boyfriend comes from one the wealthiest families in South Asia and must navigate through the difficult trials that unexpectedly come with dating the heir of a financial dynasty.

It has been roughly 25 years since Hollywood produced a film featuring and starring an all-Asian cast with “The Joy Luck Club” and people behind “Crazy Rich Asians” believe their film will be a game changer that opens doors for more contemporary Asian featured projects produced by Hollywood studios.

Recently Kaleidoscope Reviews spoke with actors Awkwafina, Ronny Chieng, and Nico Santos who star in the film about the significance and expected impact of a film like “Crazy Rich Asians.”

Director Jon Chu went on record saying that “Crazy Rich Asians” is not just a movie but part of a movement. How do you feel about the film and the statement its making?

Nico Santos: You see it with movies like, like “Black Panther” and “Get Out” – movies that center around people of color are starting to do really do really well because people are really yearning for these stories and that’s what I hope our movie. “Crazy Rich Asians” will add to that chorus of people wanting to hear all of these authentic stories. Rising tides lift all ships and I hope this just opens the floodgates for more people of color and queer people to tell and tell their stories and be the center of their own stories.

Awkwafina: I feel extremely optimistic. I think that for Asian Americans it’s going to open up a new Hollywood that we’ve never seen before for everyone.

I’d imagine it is refreshing to see Asians in a title role and not being a stereotype.

Ronny Chieng: My favorite things about the movie Is that it I think people understand this intellectually, but we’ve never actually seen Asian people playing multifaceted characters with complicated lives and in positions of power. I think this movie showcases that very well and it just shows we don’t have to be the sidekick or the punchline, or the villain who gets killed by Tom Cruise in “Mission Impossible 6” or whatever. Nobody is doing Kung Fu. We get to be more authentic.

I read Kevin Kwan was on set a lot. Did he give you a lot of input to shape the characters?

Awkwafina: We had his book as a kind of blueprint but Kevin was on for a long time and he was very respectful of the process. He didn’t really come in and take over. Kevin is an amazing guy and I think that he is very pleased with what happened. These are his characters so he had every right to come in and say “This is not what she would do.”

RC: I feel that everyone was cast pretty close to the characters. I felt like there wasn’t anything that Kevin needed to give input on. I think he could have, but I felt like everything was moving the way it should.

NS: That was a great part about being on set is that we were given a lot of freedom, but we knew that Jon and Kevin really were there to stop it if they wanted to, but they gave us a lot of creative abundance artistically.

I’ve never heard this term “Singlish.” Yeah. Did you guys have to learn?

RC: In Singapore where I grew up, the fact that people speak English there is like surprises some Americans. They don’t know that it used to be a British Colony so the English is one of our languages, but they made it their own. I guess it’s like Ebonics or like how they speak in Queens.

So it’s just the local flavor of English. I remember I went to a language class when I was in college and the professor told me that this is not wrong English, we just made it our own. Southeast Asia is a melting pot of Indian, Malay, English, and Chinese people – not to mention the Chinese dialects. If you watch this movie, you’ll see it all. There are about 15 different languages but it’s generally there’s Hokkien, Malay, English, Chinese, and Cantonese. It’s all in the movie.

One of the central characters of this film is actually Singapore, right …

So tell me what it was like for you to experience the Singapore the way your characters in movies portrayed.

Awkwafina: You have some extremely luxurious places but there’s another side: street markets; local food all over and a cool local scene. We spent time in Kuala Lumpur and it was like we were living the movie. It was very good, and very, very real.

RC: My parents live there so I go there all the time. This movie captures the essence of it very well. They don’t just show the glitz and glamour of Asia that Hollywood shows in James Bond movies, they show everything from the street food all the way up to the Marina Bay Sands [Hotel]. It’s funny, people at a screening thought the ship on the building and the trees at Gardens by the Bay was CGI, but that’s really Singapore.

Ronny your character Eddie was a “tiger dad” that’s nothing something I’m used to seeing.

RC: People are complex characters. You can be angry and be a shitty husband. Maybe someone has trouble seeing Asian men in positions of power and be dicks, you know. So that could be it …

NS: … I know a lot of tiger dads – my dad was like that. I grew up with it and my friends’ fathers completely acted that way.

Lets talk about your show “International Student.” Its autobiographical correct about your experience in law school. How did you get into doing comedy and stand up?

I know where this question is coming from. I think there is a grain of truth in that Asian parents, I guess, generally want you to become professionals whether it’s medicine, architectural, engineering. But I do believe that at the core of it, Asian parents, and I would say all parents of all cultures, but Asian parents want their kids to have a better life than they did and expect their kids to be happier than they were even if that’s not explicitly expressed. So they express it is as, “Go be a doctor. Go be a lawyer. Don’t do what we did, okay?”

Becoming a doctor is kind of like a cheat code in western society because “doctor” means you get the prestige, you get the money, and people come to you. But my point to all this is that they, at the end of the day, they actually want you to be happier than they were. Even if they don’t really understand that. So they might push you into some things, but if you’re happy in what you’re doing they come around. No Asian parents wants to see their kid upset in life, you know … I tried to put that in the show.

Awkwafina, you rap, you’re a YouTube phenom, and you’ve appeared in two groundbreaking films this year (“Oceans 8,” “Crazy Rich Asians”) with more underway. Do you have time, and are you still planning on staying in the hip-hope game?

Awkwafina: You know what, music will never leave me. You know what I mean? Like that’s, that’s what I started with and that’s, that’s the language that I speak. It’s what I do in my downtime when I’m filming. I’ll come home at night and I’ll get on Ableton (music software) for the rest of the night. That’s how I roll, and I’ll make music until I can’t do it anymore. Acting is something that I don’t have control over right now. I can’t say I’m going to do four movies next year and these are the ones I’m going to do. But I can say that I’m going to fill my time doing music, hip hop specifically.

You know, I’ve noticed some, some disturbing trends in it [hip hop] of recent. People like misusing it, disrespecting it, like not really acknowledging what its about. I don’t ever want to make music that disrespects the community that it all comes from. So as long as that happens, I’m just gonna keep doing me. I have a very small audience and I never try to push it onto people. It is what it is. If you like it, you like it. If you don’t get it, you don’t get it. I’m okay with that.

Nico your character is Asian and gay something that you don’t see a lot. Even your character on “Superstore” is gay. At some point, do you feel like you are the spokesperson for the Asian LGBTQ community?

NS: I mean, honestly, when “Superstore” first started, I kind of felt that way. Now it feels like I’m just being me. Its such a privilege and an honor to be able to portray a gay Filipino immigrant. I never thought I would be in this position at all, and the fact that I am on network television portraying of a gay Filipino immigrant effect that I made in this movie. But another queer Asian person who is very different – this is so mind blowing to me. I never saw these characters, people who look like myself on television before. So, um, I, I’ve kind of let that go. Like being like, I have to be the spokesperson because you’re not going to begin with, right?

Like it’s just, you know, but I just hope that I can just buy, buy, buy, portraying these characters that I’m able to sort of show people that there’s. So there’s a broad spectrum to the queer community. Even even just being queer and Asian, that we’re not just like all cookie cutter and then I can show the major.

I know this is stretch, but I gotta ask, were you able to keep any of the clothes from the movie?

NS: You don’t get to keep the clothes, but the glasses I’m wearing in the film are my own. I didn’t care about my clothes. I was looking through the womens clothing saying, “Valentino, St. Laurent … somebody got Dior – oh my God, put me in this!” And they were like, “That’s a dress,” and I was like, “I don’t care!”