Skip to content
You are here:HomeFront WAKANDA FOREVER ASPIRES ADMIRABLY, BUT FALLS SHORT 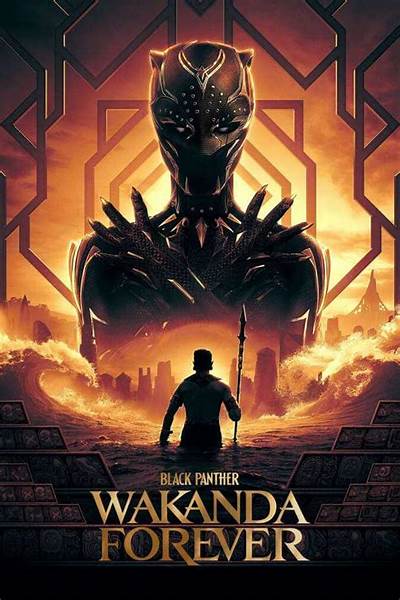 In 2018, the release of the film “Black Panther” was a seminal movie event that enthralled and inspired millions worldwide. The fictional, comic book based tale of a heroic African king ruling a spectacular technologically advanced kingdom named Wakanda might have been simply enough for the film to become the international box office phenomenon it did. However, the film also showcased King T’Challa’s dual status as Black Panther, Marvel Comics’ first black superhero, ensuring that it would become an iconic cinema touchstone of ethnic and cultural pride as well; thanks in great measure to its charismatic star, Chadwick Boseman.

Tragically, Boseman’s unexpected death in 2020 from colon cancer denied audiences another chance to witness his talents and continued exploits in the role via the inevitable sequel. Which brings us to that very sequel debuting this week in theaters, “Black Panther: Wakanda Forever”.

Boseman’s death necessitated that the film’s script be re-written in a fashion that suitably and respectfully addresses Boseman’s death and how to effectively continue the legacy of the Black Panther and the film franchise. Writer-director Ryan Coogler, who helmed the first film, is hoping “Wakanda Forever” will fulfill that mission for an audience eagerly anticipating his new vision.

Unfortunately, while “Wakanda Forever” is an earnest, respectful and often action-filled effort to replicate the quality of the first film; it falls short in several other areas to achieve the greatness exhibited by its predecessor.

The film opens by tackling the loss of its star before the opening title credits and Marvel logo even appear on screen. In a frantic and hastily choreographed scene, T’Challa is off-screen suffering from some form of serious medical crisis. His scientifically savvy little sister Shuri ( Letitia Wright ) is seen desperately working in her lab to save his life. Sadly, only moments into this scene, Shuri is informed by her mother Queen Ramona ( a fiercely regal, as always, Angela Bassett ) that T’Challa has died.

Fast forward one year later to an incident where America and other U.N. nations are jockeying to take advantage of the loss of King T’Challa to get their hands on some of Wakanda’s native supply of the powerful metal Vibranium. However, Queen Ramona firmly demonstrates to them that any thoughts that Wakanda is a weakened pushover ripe for plunder invites their destruction in defense.

Nevertheless, the U.S. manages to discover a large undersea deposit of the valuable metal thanks to a young female MIT student who’s invented the world’s only Vibranium detector. However, elation over the underwater discovery is short-lived when it turns out the metal deposit is also located near the long submerged continent of Talocan ruled by its 700-year old leader of royal blood Prince Namor ( AKA The Sub-Mariner in the comic books )

In Coogler’s story, Namor’s comic book kingdom of Atlantis has been given an effective reboot as a Meso-American hybrid of Mayan and Aztec cultures, casting Mexican actor Tenoch Huerta Mejia as the half-human amphibious monarch. Namor surreptitiously manages to bypass Wakanda’s security to present himself to Queen Ramona as a dangerous ally against the intruders threatening their kingdoms. However, Queen Ramona is as wary of Namor’s intentions as he is suspicious of hers and their meeting eventually only leads to tragedy, conflict and the specter of war between their kingdoms.

Despite some promising aspects, “Wakanda Forever” is weighted down by a script that seems bloated, busy and without a definitive focus. Foremost of its shortcomings is the manner in which it deals with the loss of its fictional hero at the very beginning. T’Challa’s off screen death and egregiously perfunctory explanation goes by in a matter of minutes. While the audience is certainly expecting a death in the film due to its awareness of Boseman’s real life passing, the death of T’Challa seems flimsily thought out almost as an inconsequential detail before quickly moving to his funeral and the emotional reaction by his people in the aftermath.

Somehow, one envisioned a more fleshed out conclusion to this heroic figure’s life than a rather cursory mention of his succumbing to an illness we never see develop. Granted, Boseman was not able to personally act out such a narrative exposition; but it appears that director Coogler’s haste to stay on deadline to complete the film sacrificed better attention to writing a more satisfactory and even more heroic demise befitting the T’Challa character.

While the film’s third act gives us a glimpse of Boseman’s greatness in the role via some flashbacks in Shuri’s memory near the end, it almost smacks of an award show “In-Memorium” segment tacked on as an afterthought to give us the feels before the credits roll. Somehow, I expected something more special to remember Boseman himself within this film.

Additionally, the storyline that includes the whiz-kid MIT student Riri ( Dominique Thorne ) seems totally unnecessary and rather superficial to the main story. While the role is well acted by Thorne, the character ultimately serves no real purpose other than for Marvel to use this film to introduce her ( and the Iron-Man inspired armored flying suit she builds and wears ) as a character called Ironheart.

It’s already been announced that this metal plated heroine will be appearing in her own Disney Plus series at some point as well as likely future Marvel films. However, it’s getting tedious to see Marvel keep using their films to shill and shoehorn in new characters slated for later debut on their streaming platform. One of the great joys about watching the original Black Panther was its general non-reliance on the other films in the MCU. Black Panther was its own self contained story focusing solely on Wakanda and the excellence of its technology, culture and people.

A chipper teenage MIT student whiz-kid sidekick from Cambridge with an Iron-Man suit was not needed in Wakanda, then or now.

Cinematographer Autumn Durald Arkapaw may do an amazing job featuring the brilliant colorful palette of Wakanda; but the underwater scenes are a dark murky mess. The majestic greatness of Namor’s kingdom of Talocan is obscured in green muted dark cloudiness lacking in detail with all the minimalist production value of – well, a Disney Plus TV show budget.

Angela Bassett is a standout as Queen Ramona bringing a regal fire to her role. Her scenes are electric with raw emotion, righteous anger and devastating grief. Tenoch Huerta is promising in his portrayal of Namor bringing a strength and conviction of purpose to his character. Though, at times his Namor as written in the script too often abruptly vacillates between regal calm and over the top anger.

Danai Gurira as Okoye and Winston Duke as M’Baku bring some welcome moments of humor to the film, with Gurira also a standout in a wonderfully staged night time battle with Namor’s warriors on a Cambridge bridge spanning Boston’s Charles River.

Letitia Wright brings the same entertaining degree of light enthusiasm to her role as Shuri. She’s also effective when the film calls for her become more serious and focused later on as the film takes a darker turn. It remains to be seen if she carries the gravitas necessary to carry the Black Panther character and franchise into the future, as the ending of the film hints at a future new incarnation of The Panther.

The flaws within “Wakanda Forever” lie primarily with a screenplay trying to cram too much into its running time. The original “Black Panther” was a unique cultural revelation told brilliantly with a wonderful cast, spectacular design and Afro-centric pride and sensibility.

“Wakanda Forever” aspires to that same greatness. For many in the audience, it will achieve some degree of satisfaction for them as an apt farewell to Chadwick Boseman. However, in that quest to replicate the uniquely original greatness of the first film, it desperately jams in too many superfluous elements designed to dazzle.

But, it ultimately fails to fill the undeniable void left by the death of its irreplaceable star.