Skip to content
You are here:HomeFront WONDER WOMAN 1984: GAL GADOT SOARS, BUT THE STORY ITSELF FALLS FLAT. 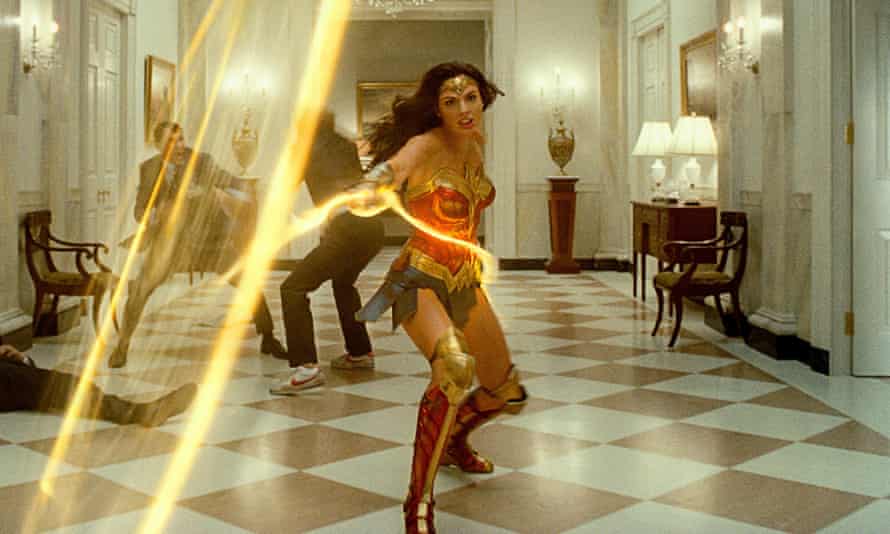 Ironically, just like the wishes that form the thematic linchpin of this sequel’s misbegotten narrative; my aspirational wishes for “Wonder Woman 1984” to be hopefully realized have been dashed by Warner Brothers and DC’s abysmal inability to continue a promising superhero franchise without eventually, predictably mucking it all up.

They did this with Christopher Reeve’s iconic Superman in the 70’s; the first two films setting the heroic template for the cinematic superhero genre to follow. Then, some WB executive doofus thought it would be great to miscast comedian Richard Pryor for a campy third installment that took decades for the character and franchise to barely recover from onscreen.

They repeated their miscalculations by messing with Tim Burton’s successfully groundbreaking reinvention of Batman back in the early 90’s; only to have director Joel Schumacher add, in later installments, campy florescent colors, Arnold Schwartzenegger’s overacting as Mr. Freeze and outlandish nipples on the Bat-suits. Again, nearly a couple of decades would pass before director Christopher Nolan brought respectability and gravitas back to the character.

Which brings us to Wonder Woman. The pairing of Gal Gadot as the long awaited incarnation of the heroic Amazonian princess and the skill of director Patty Jenkins were as magical and golden as Diana’s “Lasso of Truth”. Together, they created a film that wonderfully mixed mythology, heroism, gritty realism and deft touches of light comedy and romance into a film whose heroine and storyline literally inspired millions of women, and especially young girls, yearning for a hero they could admire and emulate.

Understandably, expectations and hopes were high that this sequel, featuring these same two superbly talented women, would lift us all to even higher thrills as Diana encountered her next adventure. Sadly, “WW84” falls disappointingly short from those high expectations, the fault in large part being a horribly disjointed, campy screenplay co-penned by director Jenkins, Geoff Johns and Dave Callahan. Notably, none of the screenwriters from the first film were involved this time around and the difference shows to glaringly detrimental effect.

In “WW84”, 70 years have passed since the events of the first film. Diana is now working as a senior anthropologist at the Smithsonian; passing her free time saving people from everyday crises while also on occasion still lamenting the loss of her beloved Steve Trevor. ( Chris Pine )

Diana as Wonder Woman intervenes to foil a shopping mall jewelry heist; presenting an opportunity for the film to bask in the delightfully tacky excess of the 1980’s mall experience and fashion for those longing for a nostalgic fix. The robbery results in the recovery of the Dreamstone; an ancient gem-like artifact that will soon be revealed to have the power to grant the wish of anyone who possesses it.

One person who’s been seeking the Dreamstone is Maxwell Lord. ( Chilean actor Pedro Pascal of “Game of Thrones” and “The Mandalorian” ) Lord is a smarmy egotistical television personality and a failing cash poor oil investment entrepreneur who’s also a neglectful dad to his adoring young son. Lord wants the Dreamstone so he can exploit its “Monkey’s Paw” catch, that while the stone indeed grants a wish, it also takes something precious from the person making the wish.

Meantime, the Dreamstone ends up in the office of Barbara Minerva, ( Kristen Wiig ) a socially awkward and timid antiquities expert at the same Smithsonian building where Diana works. After Diana feels empathy for Barbara’s social awkwardness, the two go out for a friendly late dinner to bond as colleagues. It’s then when the mousy Barbara starts to admire and envy Diana for her beauty, charm, confidence and more; wished for traits that the Dreamstone will ultimately award to Barbara with terrible and ferocious consequences for her, her personality and ultimately her physical appearance.

Also during this time, Diana, unaware of the stone’s actual power, makes a wistful random wish that results in the return of her lost love Steve Trevor. The manner of his return is borderline ridiculous as presented within the script and seems more in keeping with being part of an episode of the old TV show “Quantum Leap”; ironically a show that began in the late 80’s. However, such inclusion here is no clever nod to the era; but simply a lame excuse and manner in which to bring Trevor back from the dead for a romantic subplot.

Eventually, Lord deceptively charms Barbara into a circumstance in which he gains possession of the Dreamstone and globally uses its power to grant wishes in a unique manner that ultimately brings the entire world to the brink of destruction. It’s left to Diana to both defeat Lord and his diabolical plan for world domination; while also battling Barbara who, by this point, has wished herself to not only inherit Diana’s strength and confidence; but also transform herself into a feral she-beast.

The main failing with “Wonder Woman 1984” is that the story line is all over the place with little cohesion and plenty of inexplicable holes in the narrative. Unlike its predecessor, this film seems to bank heavily on the excess and camp factor that seemed, perhaps on paper, a perfect fit for the 1980’s.

Instead, it’s a misbegotten hodge podge.

Pascal as the primary villain Lord, plays the role far too over the top with scenery chewing abandon. His manic delivery and constantly sneering grin borders on villainous parody making his menace hard to take seriously.

Wiig’s character had more potential in this film and “WW84” might have benefitted more by focusing on Barbara’s dynamic of admiration and envy of Diana and its ultimate corruption of her as the sole primary conflict. Here, her contribution to the narrative comes off as a tragically unexplored side note. Additionally, Wiig’s limitations as a dramatic actress thus far wouldn’t have made such a character exploration totally believable anyway.

The scenes between Diana and Steve Trevor offer much more in terms of enjoyment and depth. In a turnabout from the first film, it’s genuinely funny to watch as Diana is now guiding the anachronistic “fish out of water” Trevor through the fun, pop-culture and fashion of the 1980’s.

The action scenes and special effects are simply serviceable this time around. Though, the opening sequence set during an Olympian-like competition featuring a young Diana on her home island of Themyscira is quite exciting and designed to impress on a large IMAX screen.

Alas, Covid pandemic concerns have resulted in many viewing this on smaller home screens via HBO Max, though the option to see it in theaters is still available to audiences. However, the “Cheetah” transformation that takes place for Barbara by the third act is probably best seen on the smaller screen, as the CGI effect looks as though she were an extra from the recent screen debacle “Cats” left on the cutting room floor. It’s not surprising the final action sequence between the feline Barbara and Diana takes place at night to obscure the lackluster special effect of Barbara’s “Cheetah” incarnation.

On the positive side, Gal Gadot is once again the saving grace of this film. Her performance saves “WW84” from being a complete disaster and worthy of watching, if only for her earnest and sincere characterization of a super heroine of convincing principle, empathy and hope.

Gadot continues to add poignancy, compassion, strength and depth to her portrayal of Diana Prince / Wonder Woman. There’s a stellar moment in Gadot’s performance as Wonder Woman experiences a great emotional loss. The grief and pain on Gadot’s face as she endures this moment is a palpable gut-punch and Gadot plays it for all she’s worth with stellar success. Even when the written dialogue from the screenplay seems ludicrous; Gadot elevates her part with a sincerity and conviction that makes it believably work.

Seconds later after this moment, Diana unexpectedly discovers a new strength and ability that’s wonderfully well orchestrated and directed by Patty Jenkins. It’s a sequence that evokes some of the best moments of discovery and wonder as defined by Christopher Reeve as Superman.

“Wonder Woman 1984” is not completely unwatchable nor even horrible. Despite its obvious flaws, its overall hopeful tone may be just the trick for audiences wearied by a miserable real life year of dread and drama.

However, “WW84” most assuredly should have been a much, much better film and sequel befitting the path cleared by its amazing predecessor.