Skip to content
You are here:HomeMovies CRITICAL THINKING: GAME FOR THE GAME 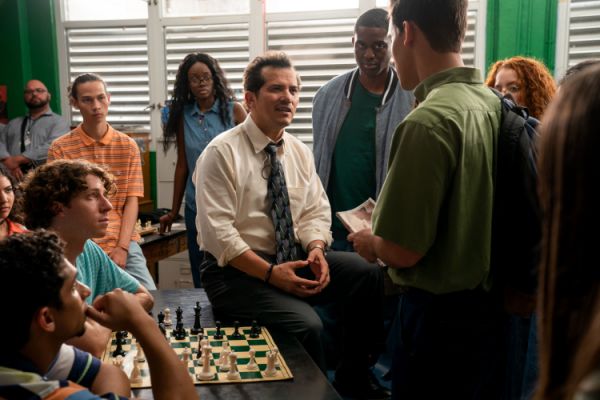 John Leguizamo’s latest film “Critical Thinking” is the kind of purposeful uplifting film about a group of underprivileged underdog school kids striving to be something better; that you’d swear you’ve seen it before – perhaps many times. Dating back to 1967’s “To Sir With Love” and “Up The Down Staircase” to 1988’s “Stand and Deliver” followed by lesser efforts like “Dangerous Minds” and “McFarland, USA”; the narrative hook is basically always the same. A dedicated teacher at an underserved urban high school tries some unorthodox measures to energize and inspire his or her students. The ultimate goal by the film’s end is for the students to reach their fullest academic potential or untapped talent. More times than not, the story is, at minimum, based on true events.

It’s most assuredly a well worn storyline; perhaps even an overused cinematic trope. However, the fact that you’ve seen such predictably formulaic films so often is because that formula, in the right directorial hands, can be a winning one.

Such is the case with Leguizamo’s feature directorial debut about a real life group of students at Miami Jackson High who, in 1998, became the first inner-city chess team to win the game’s student National Championship. Leguizamo also stars as Mario Martinez, a fast talking teacher of an elective chess class that doesn’t receive the attention nor respect of the school administrators, especially the principal ( Rachel Bay Jones ). She sees Mr. T’s class, as the kids call him, as just a dumping ground for trouble making students for an hour or so during the school day.

However, Mr. T believes the students in his class are capable of more than what’s expected of them via the intellectual game of chess. He teaches the students that “chess is the great equalizer” where no matter who you are, where you’re from, or whether you’re rich or poor, chess levels the playing field down to simply your skill and intellectual mastery of the game’s strategy against your opponent.

Martinez teaches his students the strategy, and even the history of the game, via a delivery of straight-talking street jargon and performance art. If you’ve ever attended one of Leguizamo’s live one-man stage shows ( and I have ) you’ll get the idea of what he presents in this film to the chess class students.

During one scene, very reminiscent of Leguizamo’s recent one-man show “Latin History for Morons”, Leguizamo dons a series of wigs, beards and several fake accents to bring to vivid life for his students the unique moves by Paul Morphy in a winning chess match in 1858. Rather than an abysmally boring recitation of game strategy: Martinez’ wacky performance  captures the students imaginations and interest by transforming the old match into something vibrant, exciting and alive.

It helps immensely that the film isn’t a chess team origin story where Martinez has to pique their interest in the game from scratch over the course of the film. These students are already game for the game. Their love for chess has already been long instilled in them from the first moment we see them.

Instead, “Critical Thinking” takes us through the journey of five students in the class ( Four Latino, one African-American ) who long to bring home a championship win, despite personal obstacles. Sedwick ( Corwin Tuggles ) is a gifted player who lives with an alcoholic and belittling father ( Michael Kenneth Williams ). Sedwick’s father demeans his son’s ability and interest in the game, taking delight in his son’s losses when the two play against one another.

One of Martinez’ other promising players, Ito ( Jorge Lendeborg Jr. ) is one of those cliched characters torn between following the promising path of playing chess, or falling in with being one of the neighborhood drug dealer’s crowd of losers.

Ultimately joining the class and team is new Cuban immigrant Marcel ( Jeffrey Batista ), a chess wunderkind who astounds the group with his ability to play and win by playing four simultaneous games with his back turned to the boards, eyes closed, while envisioning in his head the games he’s playing against his classroom opponents.

Leguizamo’s direction is wonderfully insightful within this film. He turns what might be a visually mundane story about chess into something actually as exciting to watch as any athletic event. His choice of camera angles, quick edits and close ups of the intensity on the player’s faces as they square off against their opponents on their road through the qualifying championships gives a vibrant energy to the moment.

The charisma and appealing nature of the young cast makes watching their journey on-screen something worth the audience investing their time and attention. The script written by Dito Montiel has its share of fun dialogue and entertaining moments between Martinez, his students and even the principal who is eventually won over to support the team.

However, “Critical Thinking” is not a total lightweight joy ride. Barely a half hour into the film, there is a jarring scene, well staged by director Leguizamo, that shocks the audience into realizing and never forgetting that these students live in a brutal urban landscape. Chess is their emotional lifeline in a world where life for some of them can be very cheap and all too brief.

The narrative ground that “Critical Thinking” covers is a familiar one complete with the obligatory visual coda featuring the real life characters the actors portray as they are today. This film is a story of individual and group triumph against formidable odds. It’s a story of believing in one’s self and each other that works in great measure to Leguizamo’s earnest and emotionally committed direction; as well as a talented group of engaging young actors.

To paraphrase one of the students in the film, “Critical Thinking” may be “corny as hell” with its aspirational, uplifting themes and intentions. But in these troubled times, such familiar and delightful “corn” can be amazing cinematic comfort food.