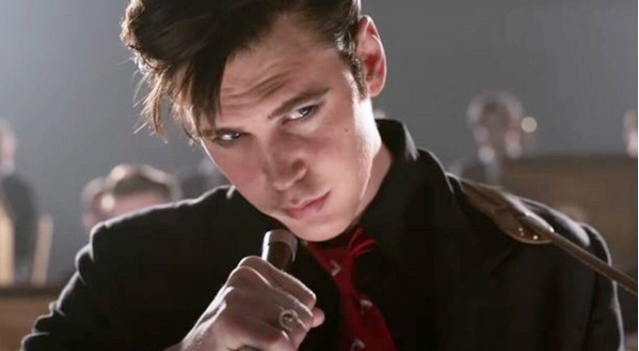 Fast forward several years and Elvis evokes vague recollections of a litany of mostly forgettable musical films ( notably excluding Viva Las Vegas with the smoldering Ann Margaret ) and equally forgettable songs. Seriously, name and sing the lyrics to just three Presley movie songs other than “Love Me Tender” and the aforementioned “Viva Las Vegas” from a decade of movies he made like sausages.

Then there’s the Vegas years, where Presley’s string of sold-out performances on The Vegas Strip conjures up imagery, both of slim and Fat Elvis, that inspired legions of Elvis impersonators worldwide and hack artists painting Presley’s image on countless discount store velvet canvases.

Elvis’ life and storied career was filled with early stellar success later coupled with plenty of bawdy and gaudy excess and drug-fueled eccentricities. It was a glitzy, bedazzled, multi-layered carnival that other filmmakers have tried to depict before, but never quite managed to fully capture Presley’s essence throughout his lifelong roller coaster journey.
Which brings us to director Baz Luhrmann’s spectacular biopic, “Elvis”. I’ve never been a serious fan of Luhrmann’s “More is More” bedazzled approach to cinema in such films such as 2001’s “Moulin Rouge” and 2013’s “The Great Gatsby”. However, in the case of “ Elvis”, Luhrmann’s style of cinematic visual and musical overkill seems tailor-made to appropriately depict Presley’s enormously successful and emotionally turbulent life spanning just over four short decades.

Luhrmann’s affection as a director for arguably garish visual overstatement and anachronistic musical choices in the staging of various scenes somehow fits in perfectly with depicting the crazy “over the top” life, lifestyle and career trajectory of the performer many still revere as simply “The King”. Though, Luhrmann’s film shouldn’t be seen as a completely factual documentation of Presley’s life; but rather, a thoroughly effective and stylized impressionistic portrait of Elvis’ essence as a man and performer.

“Elvis” begins with Presley’s life as a young boy whose impoverished white family lived in a poor shanty area of Memphis, alongside the other downtrodden African-Americans of the city during the late thirties into the 1950’s. Luhrmann spends a significant portion of the film’s first act depicting young Elvis being irresistibly drawn to the rhythm and blues, jazz and gospel music of those around him. Young Presley’s initiation into gospel music during a Sunday tent revival meeting turns quite literally into a religious experience that physically knocks him off his feet..

Later, Presley is shown frequenting the music hangouts on Memphis’ noted Beale Street forming a friendship with a young B.B. King who would advise him ( according to the film ) of the success Elvis could have as a white performer during those segregated times bringing blues inspired music to those who ordinarily would never hear it. Luhrmann seems to be attempting to present a contrary answer to those Presley critics over the decades who might say the singer opportunistically appropriated black music during his early career; by instead positing that Presley simply sang the songs that he grew up listening to.

However, the true star of this film is Austin Butler in a multi-faceted breakout performance as Presley. From Elvis’ early successes on stage to his pinnacle of stardom in Hollywood and Vegas, Butler manages to truly inhabit Presley’s essence as a charismatic performer in every gyration, move and even subtle facial gesture. With the memory of hundreds of thousands of Elvis’ impersonators over the years, it would be easy for an actor to inadvertently fall into a trite and ineffective caricature of Presley. However, Butler brings the essential Elvis into sharp focus on screen, whether performing with electric magnetism on stage or conveying a sense of vulnerability and realism in private scenes such as when Elvis is shown sobbing uncontrollably in grief after his mother has died.

One of the more electric performing segments in the film is when director Luhrmann has Butler recreate Elvis’ the songs and moves from Presley’s famous 1968 televised “Comeback Special”. The original real-life performance remains one of the most unforgettable moments in television entertainment history.

However, Butler dressed in Elvis’ signature black leather jacket and slacks while playing his guitar and singing his early hits to jump start his then flagging career fully captures Presley in an astonishing charismatic fashion that no other actor has ever accomplished before. More astonishing is the fact that Butler does much ( if not all ) of his own singing as Presley. Every musical number by Butler in this film is nothing short of magnificent.

It is truly a star making performance.

Though “Elvis” runs almost three hours in length, the film rarely lags. However, Luhrmann’s narrative of Elvis’ life does shortchange us at various points. Presley’s courtship of an underage Priscilla during his Army days in Germany is given a rather cursory detailing before they ultimately, and suddenly in the film, get married. The decade where Elvis lost a massive chunk of his live performing years churning out duds in Hollywood isn’t depicted with much more clarity either. Most significantly, Elvis’ significant decline amid an excess of drugs, overeating and fatigue is given all too brief exposition leaving the audience with an incomplete picture of the inner complexities and personal turmoil this otherwise phenomenal performer endured.

What “Elvis” does accomplish is showing an overall superb portrait of Presley’s life, career and complex relationship with the man who was both savior and devil throughout his turbulent years as a performer. It also shows Presley as a spectacular performer and innovator, striving for fame and success on his own terms; and yet, once accomplished, never quite finding the happiness he believed that fame and success would bring.

Elvis may have left the building, but this film will linger in your memory for quite some time.