Skip to content
You are here:HomeFront ‘Fahrenheit 11/9’ creates more clutter than conversation 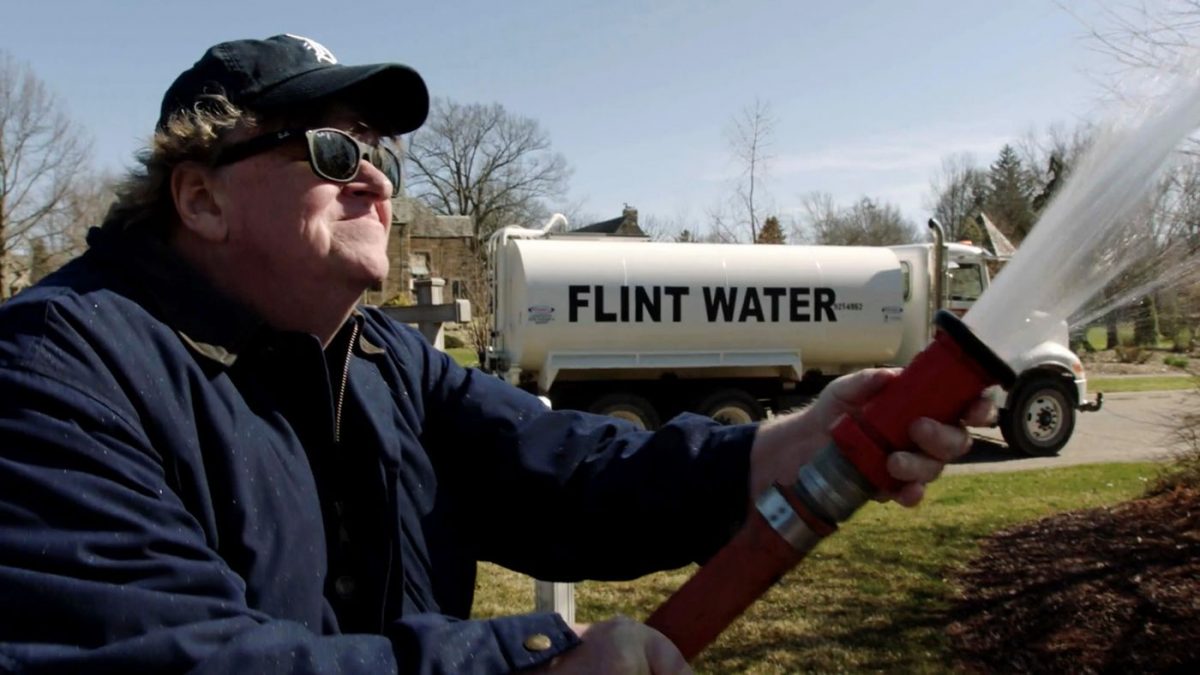 For the record I have a love-hate relationship with Michael Moore. Since “Roger & Me,” Moore has been a constant rumble of good intentions about various pluses and minuses we have about our country and primarily its failures. For his efforts, I’ve always been grateful. Quite often he is a mouthpiece for the masses, but his methods more-often-than-not drive me absolutely bonkers.

My warning is in no way a prescriptive lens to view my take on “Fahrenheit 11/9,” his latest doc which poses the single question: How in the hell did Donald John Trump become the 45th president of the United States? This is not unusual for his documentaries. He typically poses one question, but unlike other documentarians, its more of a random rant than a well thought out discussion.

The film starts at that moment when people were preparing to pop their champagne and watch history in the making as America was poised to elect its first woman president. And then, the train took a detour into Trumpland. The footage of shock, dismay, and unbelief was honestly hard to watch –especially scenes of Trump and his camp meander onto the stage completely unprepared for the life they obviously didn’t expect to happen.

Its here the film truly ramps up, posing his “How in the fuck did this happen” monologue along with several prongs as a seemingly nonending branch of ideas about Trump, his followers, and the country’s complacency towards government and its machinations. Moore vilifies Trump as opportunistic, narcissist, with a disturbing sexual obsession with his daughter, Ivanka. While everything I’ve mentioned is old news to most (even the creepy Ivanka shit), its how Moore masterfully fits these nuggets of his character together. He describes Trumps unending tirade against the Central Park Five; his rental bias lawsuits; the birther sham he concocted while considering his first run for office, and Ivanka – a montage of images, sound bites, and clips illustrating their peculiar relationship. The characters study is bold, funny, and uncomfortable to which he owns – he knows its awkward and says so alluding to the absurdity we must swallow as our leader of the free world.

As simplistic as this character assassination should be, “Fahrenheit 11/9” loses its way posing too many causes, consequences, and solutions that in no way relate to his original premise.

One of the most compelling veins that run throughout the film are the problems in Flint, Michigan. Moore uses the troubles of his home town as a cautionary tale of elitism, corruption, and ethnic cleansing that can happen when we the people allow the powerful to dictate the life of the powerless. In short, Moore illustrates they don’t care about you and never will. Whether its the horrific water issues affecting the city or the unannounced war exercises that happened in their town. Moore shows viewers the troubles of a city under siege by an elite-run government who are more concerned about maintaining profits and status quo no matter the cost to its average citizens who suffer through it all. The scenes are heartbreaking to see young children suffering from lead poisoning or filling their toy water guns with bottled water. It is their new normal and Moore clearly makes the point this is not just unnecessary but downright evil.

If you cannot make the connection from the Flint crisis to our 45th president, you’re not alone. It’s the central problem with this film, “Fahrenheit 11/9” lacks focus. Moore jumps from rationale to rationale: Is it our elected establishment; the elites and their lobbyist; the misunderstanding of America’s true ideology, or just our complacency in the democratic process that spawned our current predicament that has polarized the country. His ham-fisted approach to explaining Trump’s win jumps from being a primer to understanding the origins of the Third Reich and its leader (That’s right, that fucker’s name will not be mentioned in my review – period), then optimism, followed by despair if the current politic continues to reign.

Moore includes some really powerful examples of democracy in action including up-and-coming politicians like Richard Ojeda in West Virginia, Alexandria Ocasio-Cortez, and even the teacher strike in West Virginia that sparked the nationwide walkout of teachers fighting for better wages and benefits. Yes, those are clear representations of people fighting to make our country great again, but by this point you’ve completely forgotten how we got to this point and instead relish the shiny, happy moments he believes the country to be and will be again if more people follow in their footsteps. What does this have to do with Trump, nothing.

As I said, I have this fickle view of Moore’s recent documentaries. He’s a celebrity with a platform to say anything about anything that consequentially, you have to pay to understand. Since “Sicko,” Moore has done very little to highlight issues in my opinion and instead creates a string of PR stunts minced with archival footage and his insights to push his take on issues he has a beef with. I’d love to see him address police brutality against people of color, or even a safer topic if he is so inclined, like the countries lacking education system instead of his often laughable citizen’s arrest antics we are forced to watch in film after film. My qualm with Moore does not distract from his ability as a filmmaker. In fact, I applaud his ability to craft conversations in most cases but “Fahrenheit 11/9” just isn’t one of them.

By the end of the film with is footage of political failings; racially-fueled Trump supporters; dictator similarities; Flint, Michigan failings; the Parkland High School massacre, and Charlottesville, its easy to feel emotionally bankrupt and irritated. That essentially is the point of Moore’s argument – not how we got here as he originally proposed, but essentially he turns the proverbial camera back on the audience and asks how did we allowed “this” to happen on “our” watch.  That’s all good, but I just wish he would have told me this sooner.