Skip to content
You are here:HomeFront Gina Rodriquez is Inspiring Others to Achieve Their Dreams 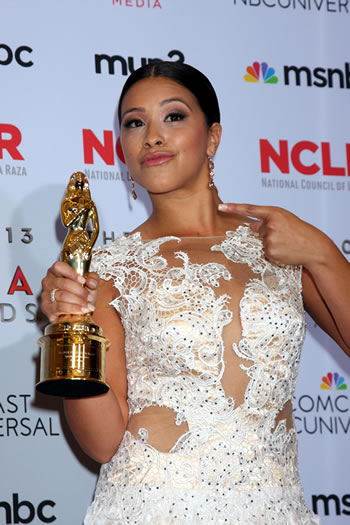 At Kaleidoscope Reviews, we like to showcase and support daring and independent-minded artists of color, communicators, writers, performers, media-makers, and influencers. Today, we would like to celebrate Gina Rodriguez.

Gina Rodriguez is an American actress of Puerto Rican descent. She’s best known for her role as Jane Villanueva in The CW comedy-drama series Jane the Virgin, for which she has been nominated for three Golden Globe Awards for Best Actress in a Television Series Musical or Comedy, winning once in 2015. She also portrayed roles as Majo Tenorio in the musical-drama film Filly Brown, as Beverly in the soap opera The Bold and Beautiful and as Andrea Fleytas in Deepwater Horizon.

From a very early age, Gina realized that there was a lack of representation of Latinos in Hollywood. At the age of 15, she’d never seen a Puerto Rican represented onscreen. “When did Puerto Ricans come about?” the Jane the Virgin actress asked her mother. “I never see us on my favorite TV shows or movies. We must not have existed back then, right?”

In a tearful speech at the 2015 Kennedy Center Honors, Rodriguez paid tribute to honoree Rita Moreno, the second Puerto Rican to ever win an Oscar. Rodriguez said watching Moreno, who appeared as Gina’s character’s grandmother on Jane the Virgin, gave her “hope…a reason to fight and to speak up.”

The Jane the Virgin star is becoming an inspiring spokeswoman for her generation and other Latinx, using her voice to not only promote and spread positivity to her followers but also to address a myriad of issues women of color face in the entertainment industry. She has spoken up about cyber bullying and about interracial Latinx racism when followers criticized her “imperfect Spanish” and told her she wasn’t “Latina enough.”

She has made it clear that actors can stop perpetuating stereotypes in Hollywood. She says it’s all about creating a different perception of minorities in America, and if actors want that to change, they might have to make sacrifices and wait for the role that does not portray Latinx as just janitors, maids, criminals, and sexy, sassy, spicy Latinas. These sacrifices might not always pay the bills, but according to her, that’s okay.

On September 5th, the Trump administration announced the rescission of the Deferred Action for Childhood Arrivals (DACA) program, which protects approximately 800,000 undocumented immigrants brought to the United States as children from deportation. After the shocking news, Gina declared she will be producing two immigrant-inspired series for CBS and The CW. Have Mercy will follow a Latina doctor who is unable to practice once she moves to Miami. Downgraded to nurse, she begins an illegal medical clinic out of her own home to serve her community. The show will highlight the struggles many immigrants, regardless of status, face when starting over and trying to find jobs that correspond with their experiences.

Gina’s second show, Illegal, will highlight another aspect of the immigrant experience. This series tells the story of a high-schooler who learns he’s undocumented. Rodriguez will serve as the producer for Illegal, but the show is really the creation of Rafael Agustin, who based it on his own life as an undocumented immigrant born in Ecuador.

As if that wasn’t enough, on March 16, 2015, Gina was announced as a new member of the HSF’s (Hispanic Scholarship Fund) Board of Directors. The HSF is the United States’ biggest non-profit organization supporting Hispanic American higher education. Because attaining an education was the biggest priority in Rodriguez’s household, along with her determination to work towards a degree, she was able to work towards receiving a HSF scholarship. As a board member, Rodriguez will help to support HSF in a matchless and meaningful way, making sure that HSF’s mission will continue to support the original values and commitment to education.

Gina Rodriguez is fiercely proud of her work, her identity, and her body image. Like many successful artists, Gina attributes her success to standing on the shoulders of giants. It is because of this that she hopes to break down barriers for future actors. To that end, she is already inspiring other artists of color that they, too, can achieve their dreams.