Skip to content
You are here:HomeFront Hamilton Stars Renée Elise Goldsberry and Okeiriete “Oak” Onaowadan Dropped Into The AAFCA Roundtable 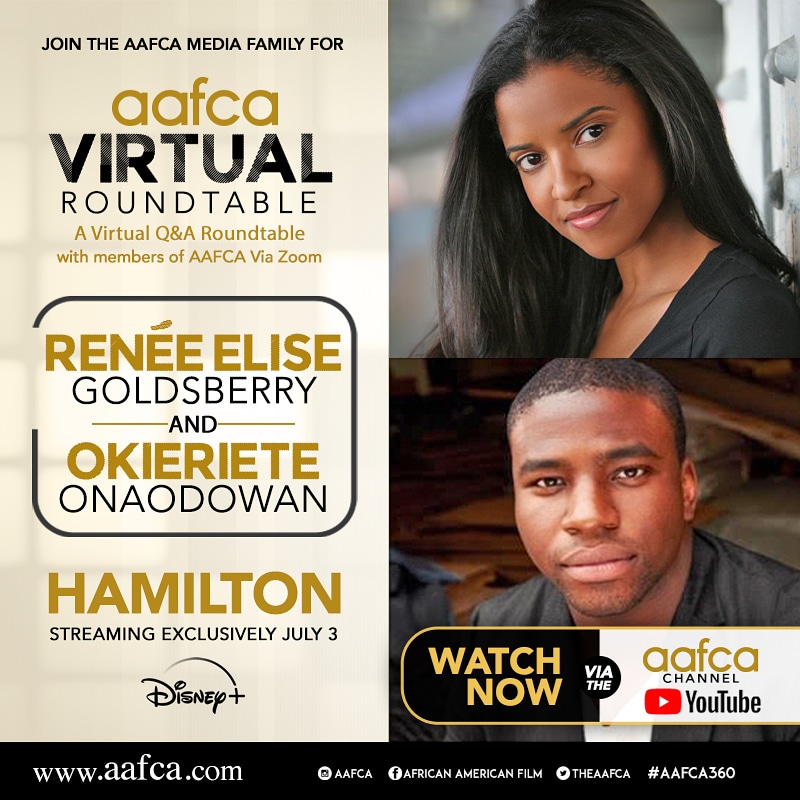 For everyone who didn’t get to see Hamilton with its original cast on Broadway, it is now available on Disney+. Before the celebrated musical hit the streamer, however, Hamilton stars Renée Elise Goldsberry, who won a Tony for her performance as Angelica Schuyler, and Okeiriete “Oak” Onaowadan who originated the roles of Hecules Mulligan and James Madison, Zoomed into the AAFCA Roundtable.

Both Goldsberry and Onaowadan were excited to share their experiences with Hamilton, especially on the verge of another major milestone. Wrapped around Alexander Hamilton, a Founding Father of the United States whose life, up until the play opened in 2015, had gotten less fanfare than others in this group (specifically George Washington and Thomas Jefferson), Hamilton has just not stopped making an impact. By presenting his life through a multiracial lens, accentuated by the use of hip-hop, Lin-Manuel Miranda’s Hamilton showcases talent Broadway may have never otherwise cast in major roles.

“I think one of the most important things that we do in the theater in particular when we get to interact more with other people on the show than you do in film is we learn who we are and we show who we are through our relationships with the other people in the show with us and that ability to kind of love and celebrate and challenge each other is colorless. So that’s that’s what we did,” Goldsberry shared.

“Their choice to cast [Hamilton] diversely and how crazy groundbreaking it was, I always felt it was also crazy and groundbreaking to take a time with all of the story they had to tell and the short amount of time they had to do it, to take time and tell the story of a woman,” she expounded.

In speaking on the effect Hamilton has had on Broadway and should have on Broadway, Onaowadan, a one-time standout football player who set his sights on musical theater after an injury, shed insight about the future of Broadway, assuming its post-COVID return of course.

“In order to promote and champion diverse voices, there will be risk, because due to systematic racism, the system isn’t built to reward you for taking those risks on black and brown voices and stories,” Onaowadan shared. “I hope that it does change. We’ve seen a lot of like temporary change, and then a couple months or a year when people forget about it, things go right back to normal. So I think it really depends on us as people and everyone who’s watching in this industry and speaking up to continue this dialogue and keep holding all of these institutions to the standard. This is sustainable change. This is a lifestyle change. What we’re asking you don’t do for a couple months, a year or with a few productions and go back. This is actually going to be a thing that it will be from now on. From now on, you will be taking risks on Black or Brown voices and, in time, you’ll see that people are ready to see it. You just have to present it to them.”

Goldsberry also addressed the impact Hamilton has had on how young people acknowledge and embrace history. “I’ve always loved history. Even when I was a kid in history classes, really boring history classes, I knew it was the teacher’s fault. I always knew. I always knew that our history books were a soap opera,” she shared. “I knew the storyteller is what will be that bridge. And yeah, Lin, he’s a great storyteller.”

All this richness is what makes Hamilton’s arrival on Disney+ so special. “What a gift that now that cameras can capture what we’ve been doing after a year of doing it,” Onaowadan shared, reflecting back to the filming. “That’s the gift, that they decided to shoot it then when all our nerves and jitters and we’d experienced everything that could go wrong on stage, that we’re such a well-oiled machine that the cameras are just they’re capturing it . . . we’re just in the groove in such a way that it’s just undeniable what it is.”

Catch the full conversation on The AAFCA Channel on YouTube: https://youtu.be/UmSiLr5fGyU