Skip to content
You are here:HomeFront John Lewis: Good Trouble with Dawn Porter and Erika Alexander 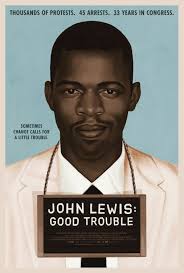 Over the last decade, civil rights statesman and longtime Georgia congressman, John Lewis, has started getting his due. And the latest wave of love, awe and appreciation comes via celebrated documentarian Dawn Porter’s John Lewis: Good Trouble.  Porter, along with the beloved Erika Alexander of Maxine Shaw-Living Single fame, one of the film’s producers, joined the AAFCA Virtual Roundtable to discuss their homage to the great man.

Throughout the conversation, Porter and Alexander were generous enough to address the state of the industry for Black creatives—with Alexander even offering a brief tutorial on Black sci-fi and why Black creatives must write. Both women, in their own way, shared why their John Lewis documentary is necessary. Porter even addressed a non-Black critic insisting that the film fails for not sharing why John Lewis became an activist.

The criticism, Porter shared, rings false because John Lewis, in the documentary, is very clear about his actions. “He told you why: he hated discrimination,” the lawyer-turned-filmmaker shot back, inferring that real people aren’t usually driven by a big, Hollywood-style tragedy.

“It’s just that simple,” she continued. “That very comment to me felt racially insensitive. If you are a white person, you can choose whether or not you’re going to tolerate racial discrimination. If you are a Black person, that is not our choice.”

What is Porter and Alexander’s choice is to create projects centering Black people. For Alexander, John Lewis: Good Trouble fits in with her quest to exercise more Black power within an industry that has not been designed for us.

“Hollywood wasn’t made for Black people,” she schooled. “So, if we make our way inside of it, it’s because we create new paradigms and tear down the old system. It can’t stand. It’s untenable. It’s unfair. And it has nothing to do with our real relationship to culture. We, as the 13 percent or less than the 13 percent, have been the biggest culture makers in world history. That’s a fact. The fact that they can devalue us every day, and point to what we haven’t accomplished in our narrative, and devalue it across, not only the nation, but then in the global market, is one of the biggest examples of how powerful racism is.”

Fortunately, there are real-life heroes who actively challenge systemic racism. “John Lewis is talking about voting rights and standing for the definition of what America is supposed to be,” she noted. “And it doesn’t get that way because we wish it; it gets that way because we point it out, and then we do something and take action in order to realize it.”

As a filmmaker, Porter says she was on a mission to humanize Congressman Lewis. “Instead of making him a statue, I wanted to make him a person.”

That meant taking him back to his hometown of Troy, Alabama and even chatting with some of his siblings. Porter also captures him dancing and just being joyful. The meat, however, comes from him doing what has always been in his blood: pounding the pavement, shaking hands, and making a change.

“When he was 17 and wrote to Dr. King to ask to desegregate a university, when he was 19, he sat in at lunch counters and integrated Nashville, when he was 23 and spoke at the March on Washington, he was just putting one foot in front of another. He wasn’t trying to make a whole movement. The fact that it became part of a movement is how we look at it today. But what he was doing is what he thought was right,” Porter preached. “But he didn’t stop and he hasn’t stopped.

To watch the full interview, please visit The AAFCA Channel on YouTube: https://youtu.be/SyvySJXDpP4