Skip to content
You are here:HomeFront KALEIDOSCOPE PERSONALITIES – JUAN CACERES 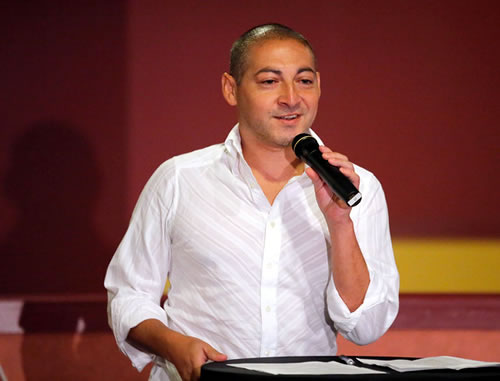 Juan Caceres is an independent multi-media producer whose award winning feature ‘Elliot Loves’, was seen exclusively on HBO‘s various platforms. He also served as an associate producer on ‘Emoticon’, a feature film that was released in NY/LA. As a Film Festival Programmer, Juan’s a founding member and Director of Programming for the HBO-presented New York International Latino International Film Festival (1999 – 2012). He was also a programming associate for Tribeca All Access, an initiative of the Tribeca Film Festival that aids and supports underserved minorities in the film industry. He’s a creator and writer for the blog ‘LatinoBuzz’ on IndieWIRE.com, the leading source for independent-minded filmmakers, the industry and moviegoers alike where he covers Latino indies in a weekly column. Most recently he worked with the Urbanworld Film Festival as part of the programming team. Kaleidoscope Reviews recently caught up with him to learn more about his growing career.

KALEIDOSCOPE REVIEWS: Tell us about your job and responsibilities?

I wear many hats. I’ve written, directed & produced. I’ve programmed festivals for many years now but I would say my greatest passion is writing. I had a blog on Indiewire which covered indie Latinos which no one does. My first interview that got me there was Gina Rodriguez in 2011 right before she went to Sundance. I knew she was coming back a star.  Programming is a joy because you get to see people evolve whether they are filmmakers or actors. Now that I’m at Urbanworld Film Festival it’s even better because now I become friends with filmmakers from all over the world. It’s supernice nice to get a message from your homegirl in LA who is in Curacao for a festival  and meets a filmmaker from Trinidad and they both have nice things to say about you.  It’s 100% about fostering great lasting relationships. That’s when filmmakers trust you with their baby.

KR: What motivated you to pursue your current career?

I kinda fell into it. I was a teen living in Florida in what could only be described as a “Trap Motel” – So sketchy! Lots of transactions. One day I didn’t feel like going out partying, so I stayed home and watched TV and I saw John Leguizamo’s ‘Mambo Mouth’ and couldn’t believe I was seeing someone like me on the TV like that. Fast Forward I’m back in NYC and waiting tables. I meet John Leguizamo’s mom and she got me an internship which led to development assistant. That’s when I fell in love with everything about the art of film.

KR: How have you overcome challenges to build your career?

Create the world yourself. Nobody owes you anything in life. I didn’t go to school, so no one was going to give me a chance. So I created my own world. It’s not easy. Still not. But if you can find something else to do, go for it. It means you never loved this.

KR: What are your top 3 attributes for success?

Integrity, Passion. Patience. Don’t screw someone over, you’ll get a reputation and those bridges will burn. If you don’t have passion, people will see right through it. It shows in your work. Be patient. It will happen exactly at the right time. Especially if you have the other two attributes.

KR: What advice would you share with next generation talent?

Always listen to someone who you trust and means well. In life, you are never as bad as someone may think and you are never as good as some may think. You can never stop learning anywhere in life. Make every mistake possible, so you grow from those experiences. It makes you a better artist and person.

KR: Where do you see your industry in the next five years?

Being able to wake up and just write. Have my own show. Producing young talent.

KR: What are your social media handles?