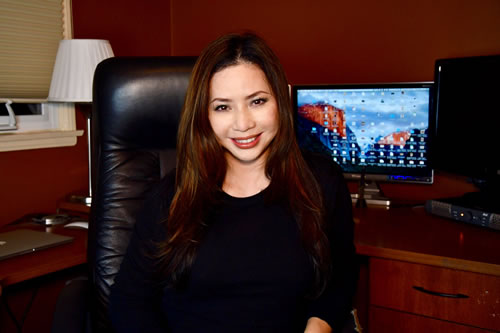 Nina Yang Bongiovi is a feature film producer with over 17 years of combined production, finance and management experience in the entertainment industry between Hollywood and Asia. Best known for her work with Significant Productions (Forest Whitaker) on independent releases like FRUITVALE STATION, DOPE and SONGS My BROTHERS TAUGHT ME, Nina is a mainstay at some of the world’s top film festivals like the Cannes Film Festival and is a recipient of the Producer’s Guild’s Stanley Kramer Award. She has also established MNM Creative to support Significant Productions’ projects covering features, documentaries and digital endeavors which all strive to be at the forefront of discovering emerging talent, developing and producing quality projects with a focus on diversity in front of and behind the camera. Kaleidoscope Reviews recently spoke to her to learn more about her amazing career.

KALEIDOSCOPE REVIEWS: Tell us about your job and responsibilities? I’m a feature film producer, producing partners with Forest Whitaker at Significant Productions. I seek out and champion emerging talent/storytellers (particularly filmmakers of color) who possess pure, raw talent and hear out his/her thoughts on what stories they would love to tell. And if a project vibes with our company’s mission, we go into development and eventually production with it. I function as a creative, logistical and finance producer. But I rely on Forest’s creative brain to get each project to where it should be (in development) for the official green-light, his mentorship for new directors, before we bring in financing.

KR: What motivated you to pursue your current career? I started in martial arts action films…Loved being on location and seeing projects get made — but I’ve always felt the stories and depth were lacking so I wanted to focus on screenplays and its process of getting it right as I moved forward with my career. Once Forest and I produced Fruitvale Station with Ryan Coogler, it set the mission of our company in producing statement pieces with a quality-driven eye, alongside promoting POCs in front of and behind the camera. Our company was established in 2010 and we’ve been blessed to have had a wonderful track record of films following this very motto.

KR: How have you overcome challenges to build your career? Challenges in the entertainment field is so common…It’s already been 17 years for me. Most give up after stepping into metaphoric landmines in Hollywood. One learns to adapt and seek out kindred spirit and build together. Don’t compromise quality, don’t work with people who hurt your soul. Make sure your intention to produce certain projects is pure.

KR: What are your top 3 attributes for success? (1) Follow your gut, when something is shady, it is. Step away. (2) Know your sh*t, lol! As a producer, you need to be proficient in development, film finance and production logistics. Also, understand the marketplace and your audience (3) Be humble and grateful that you get to do this for a living.

KR: What advice would you share with next generation talent? Be patient and pace yourself. Pay your dues. Be humble and learn, analyze failures and successes; and listen when mentors are trying to teach you — don’t be a know-it-all. Don’t be/feel entitled…Seek longevity in the business.

KR: Where do you see your industry in the next five years? I see digital and film fully converge; I see film and TV fully converge. As long as we stick to great storytelling, there are platforms to showcase all the talent.