Skip to content
You are here:HomeFront Review: ‘Once Upon a Time in Hollywood’ 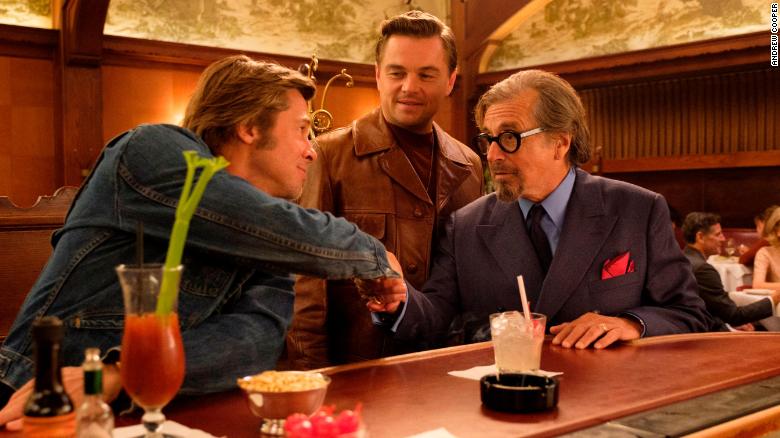 Director Quentin Tarantino’s “Once Upon A Time In Hollywood” is not only an immensely entertaining, multi-layered and often hilariously funny film that’s all but certain to please the cinematic auteur’s built-in fan following and others; but also, it’s without a doubt Tarantino’s most personal film to date. “Once Upon A Time…” is Tarantino’s definitive cinematic love letter to the industry that he has cherished, admired and, within which, built his successful career for much of his entire life.

For those who have seen the film’s trailer expecting the focus to be about the horrific August 1969 murders of rising starlet Sharon Tate and her friends by four sadistic acolytes of maniac Charles Manson; you may be surprised that Tarantino has something much different in mind here. Yes, Sharon Tate (Margot Robbie in a wonderfully incandescent yet understated performance) is most assuredly a key component within this film to set the tone of the era.

However, Tate’s presence in the story, along with her successful director husband Roman Polanski (Rafal Zawierucha) are more emblematic of Hollywood on the cusp of a changing era where new, young success is on the rise, while those individuals tethered to the old Hollywood system find themselves becoming anachronistic and obsolete.

Chief among those fitting within the latter group is aging actor Rick Dalton (Leonardo DiCaprio) a once popular TV western actor whose career has been on a downward slide ever since he left his comfy television gig to pursue seemingly greener pastures on the big screen. However, Dalton’s aim for greater stardom has for years taken a steady nosedive in cachet. Dalton finds himself playing a recurring series of secondary guest-starring shots of diminishing depth and range on popular TV shows; playing the often killed villain, rather than the heroic star he once was. As a result, Dalton has become a self-doubting, insecure boozer hating his career path. His depression over his status as an acting has-been is only amplified when a sleazy agent played by a clearly gleeful Al Pacino tells Dalton he’d be better off making Spaghetti Westerns in Italy along the lines of Clint Eastwood’s real life experience working with director Sergio Leone.

Dalton’s one saving grace and genuine friend is his longtime stunt double Cliff Booth (a stellar Brad Pitt). A former Vietnam War veteran, Booth’s own stunt career has waned amid rumors he murdered his wife and got away with it. Booth is more or less reduced out of loyalty and needed income, to drive Rick around town after the actor lost his license over one too many DUIs. The two friends’ genuinely caring buddy relationship is really the core of this film as Booth consistently works to bolster the confidence of Rick during years of setbacks. While Dalton is the near epitome of self-pity; Booth takes his spartan life living in a trailer parked in a movie drive-in backlot with an easygoing stride and confident swagger. His only friend apart from Rick is his pet pit bull.

Booth’s swagger comes into hilarious play during a scene where he finds himself goaded into testosterone fueled Mano a’ Mano fight with no less formidable an opponent than a cocky Bruce Lee (a brief but breakout performance by newcomer Mike Moh) on the set of The Green Hornet.

That cameo and TV reference are just one of the myriad nostalgic blasts from the past that make “Once Upon A Time… “ a true delight, especially for, but not exclusive to, Baby Boomers raised on black and white TV westerns, Mad Magazine in its heyday, cheesy 60’s movie trailers, neon lit restaurants and fast food joints and much more. During production, Tarantino painstakingly had sections of Hollywood Boulevard literally transformed into its late 60’s gaudy glitz and rundown seediness complete with gas guzzling muscle cars, hippies and movie marquees typical of that bygone era. The attention to detail is awe inspiring yet all too briefly seen in many of the film’s rapid paced shots.

Tarantino’s skill as a director shines through doubly so in this film. While creating the authentic atmosphere of 1969 Hollywood; the director also manages to deftly shift directorial gears in those scenes where vintage recreations of black and white TV shows with their very different and unique style are present. The clips and commercials throughout the film of 1960’s television have a singularly distinct quality that would make one think Dalton’s fictional “Bounty Law” TV show might still be running on MeTV somewhere along with “Bonanza” and “The Rifleman” reruns.

There are several running narratives in this film that we all know will eventually converge as history dictates before the closing credits that, despite the numerous laughs in this film, gives us a feeling of impending dread of what’s to come.

After several drive-by flirtations with a hippie Lolita in denim cutoffs named Pussycat (Margaret Qualley), Booth finds himself giving her a lift to the soon-to-be infamous Spahn Ranch, where Charles Manson’s devoted family of demented disciples eye Booth with malevolent and suspicious eyes. Foremost amongst them in Manson’s absence is mother hen Gypsy (Lena Dunham) and a defiantly hostile Squeaky Fromme (Dakota Fanning).

Booth used to do stunt work years ago on the ranch and wants to see if owner and friend George Spahn (a feisty Bruce Dern  is still alright, while the flower children freeloaders are squatting on his property. Booth finds Spahn is cranky but more or less okay; but he leaves with more suspicion than easy answers. This all leads to a confrontation that foreshadows a dark denouement ahead.

Meanwhile, Margot Robbie makes the best use of her limited lines in the film by instilling it with a radiant innocence and wonder. Her interpretation of Sharon Tate is one of carefree joy and anticipation about her budding film career. One of the film’s best scenes is when Robbie as Tate is thrilled to see her name on the marquee of her latest starlet role in “The Wrecking Crew” with Dean Martin. With a mixed measure of pride and shyness, Tate tells the theater workers that she has a part in the film and asks to enter as a courtesy to see her performance.

We, the audience, see Robbie as Sharon sitting in the dark gleefully thrilled to see herself on screen, while at the same time savoring the positive reactions of the audience seated around her. Director Tarantino wisely plays homage to the real Sharon Tate by not digitally inserting Robbie into the actual film clips we see; but rather, we see Sharon Tate herself on-screen doing a fine job. We get to see Sharon Tate as a talented budding actress on the potential verge of stardom, rather than the mere victim of a homicidal madman and his followers through which history dealt a bad hand to her memory.

Robbie plays this scene to perfection.

Lastly, DiCaprio has his best moment on screen while doing a guest shot, again as the villain, on an actual TV western of the era called “Lancer”. Following a revelatory moment of self-doubt on set during a hilarious (for us) chat with one of the show’s mature beyond her years child actresses (wonderfully played by young Julia Butters), Dalton screws up his lines due to a few too many drinks beforehand. He retires to his trailer to enact an insanely funny tirade to himself to get his act together on set—or he’s gonna blow his own brains out. It’s a wonderful bit of hilarious craziness in a film that has the inevitable spectre of death hanging over its final act.

“Once Upon A Time In Hollywood” is a magnificent piece of filmmaking. It’s probably the most fun I’ve ever had with one of Tarantino’s films. Its filled with wonderful performances, brilliant set decoration and costume design, the usual amount of Tarantino-picked guest cameo appearances and all the typical, but effective, Tarantino style tropes… right down to his fascination (or benign fetishization) with women’s bare feet in abundance.

Yes, there also is the unavoidable Grand Guignol of bloody violence in the final act that is so essential to any Quentin Tarantino film. However, as the actual title suggests; this is “Once Upon A Time… In Hollywood”. This film, however partially rooted in reality and history, is also a loving, yet bizarre, fairy tale as envisioned by Tarantino. As with any fairy tale that begins with “Once upon a time…”; there is usually also some degree of “… Happily ever after”—Tarantino style.

Most of all, “Once Upon A Time In Hollywood” is a terrific piece of filmmaking that painstakingly, poignantly, and often hilariously depicts Hollywood on the brink of change and its inevitable loss of innocence, It’s a saga of no matter how brightly one star’s light may burn… it maybe, just maybe may eventually dim to make way for a different and brighter star to come.