Skip to content
You are here:HomeFront ‘Rocketman’ soars musically with a star-making turn by Taron Egerton 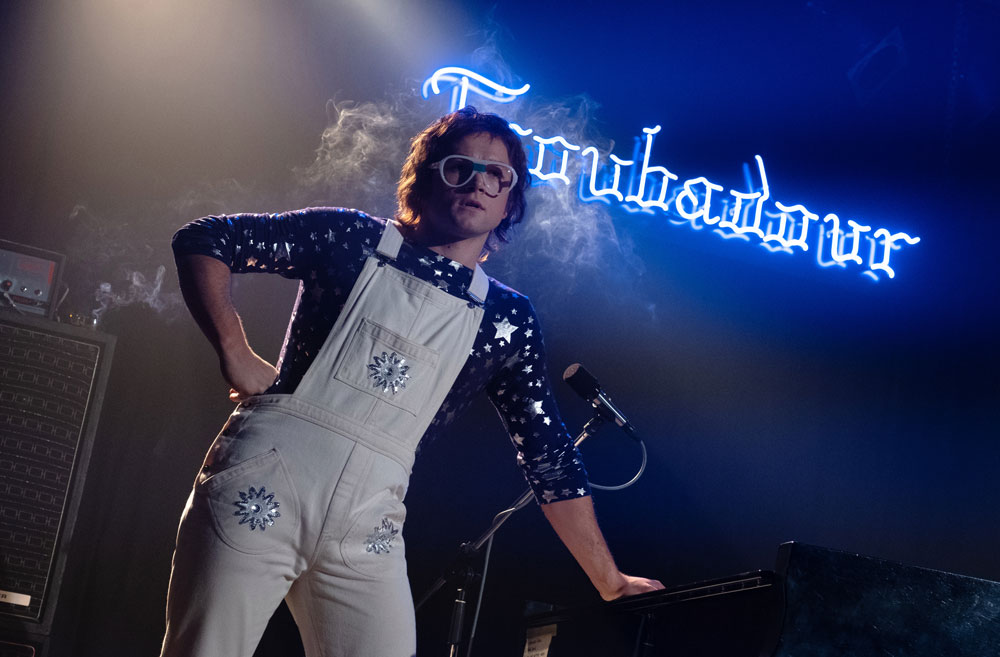 The only proper way to capture the over-the-top, unconventional life and career of superstar performer Elton John on screen, would be to present it as an equally over-the-top spectacle as presented in the new film “Rocketman”. Less a conventional straightforward biopic similar to last year’s immensely popular “Bohemian Rhapsody”, ”Rocketman” presents a warts and all narrative of John’s spectacular rise to fame, fortune and myriad self-destructive excesses, actions and interpersonal dysfunctions that nearly destroyed him.

While comparisons to “Bohemian Rhapsody” are likely inevitable (including here, obviously); unlike that film, “Rocketman” tells John’s story in the form of a glitzy, superbly choreographed rock-musical utilizing a large catalog of Elton’s hit songs to accompany and underscore pivotal moments, thoughts and emotions that were key in the singer’s surprisingly tumultuous life.

Director Dexter Fletcher, who also directed “Bohemian Rhapsody” takes the audience through a colorfully flamboyant mix of stage and imaginary performances, numerous Elton John songs sung by its lead characters to drive the narrative, flashback moments and more. This risky fantasy narrative approach makes this film a fast-paced spectacular visual and listening feast that somehow manages to effectively highlight the numerous tragic lows and heartache that the singer endured over decades before ultimately finding peace and happiness.

Taron Egerton is stellar as Elton John. While there is a slight facial resemblance to the real life performer, often aided by John’s outrageously designed glasses, Egerton and director Fletcher wisely avoid an outright impersonation of their subject. Egerton even sings John’s playlist with his own voice, making each song his own while still maintaining the wonderful integrity and meaning of each well known hit.

“Rocketman” immediately opens in unconventional style as John, decked out in an outrageously ornate bedazzled and sequined orange stage outfit complete with feathers and horns, storms into a much more sedate drug rehab therapy session. There, John plops himself down to reveal his career-long addictions to drugs, alcohol, sex and shopping, with a dose of bulimia and anger management for good measure.

Via this therapy narrative, the film tracks John’s life in flashback to his time as bright eyed child Reginald White (A standout mini performance by young Matthew Illesley) who is tragically unloved and marginalized by his cold-hearted, emotionless father (Steven Mackintosh) and a self-centered promiscuous mother (An oddly cast Bryce Dallas Howard). John’s only family advocate amid this hell hole of parental dysfunction is his loving Gran (Gemma Jones). Gran quickly recognizes that her beloved grandson has an innate talent for the piano and gets him enrolled at London’s Royal Academy of Music.

Once John grows into a young man, he meets budding songwriter Bernie Taupin (Jamie Bell). Together, they form a lifelong bond as friends and collaborators that will be tested, but never broken, throughout their lives. They gain a record deal and their soaring rocket of fame and fortune soon follows after John’s musically historic U.S. premiere performance at Los Angeles’ Troubadour nightclub serves as the duo’s launchpad.

Over the course of the remaining film, we are presented with the soaring trajectory of a superstar who’s life is punctuated with all the pitfalls of fame that John willingly falls, or jumps, into with reckless and dangerous abandon.

“Rocketman” depicts John’s long struggles with his own sexual identity; sexually promiscuous as a gay man, yet surprising his friends and professional contemporaries ( and perhaps some in the audience ) with his impulsive and doomed four year marriage to a loving female recording studio engineer Renate Blauel ( Celinde Schoenmaker ) in 1984. Even John’s attempts to find love as a gay man prove heartbreaking as his romantic relationship with a handsome John Reid (Richard Madden), his self-serving music manager turns bitter and venomously acrimonious for years.

As John’s fame grows, his adult relationship with his parents remains as strained as ever. He longs for their love but receives nothing in return but their selfish exploitation of his material worth.

“Rocketman” intentionally veers back and forth between the fantasy therapy session and moments in John’s life where he further descends into an abyss of more drugs, more alcohol and sex, a suicide attempt, emotional tirades, meltdowns and lashing out at his one true friend, Taupin. Only when he is on the verge of death, does he finally seek professional help to get clean.

Meanwhile, all this turmoil is punctuated by renditions of John’s many songs. “Crocodile Rock”, “Benny and the Jets”, “Your Song,“The Bitch is Back”, “Honky Cat”, “Goodbye Yellow Brick Road”, and many more push the narrative forward. Often it seems as though the songs themselves, as presented at key parts of the film, were written by John and Taupin at the time to reflect that particular moment of distress and pain in their lives. That’s how wonderfully orchestrated director Fletcher has positioned these familiar hits into the storyline.

A standout musical moment is when we actually get to see what seems to be the actual collaboration process between John and Taupin, as Egerton sits down at the simple piano in his mother’s living room to compose the melody for “Your Song”. As Taupin looks on, after just handing John the lyrics he’s recently written, we see Egerton as John tentatively compose the combination of rough musical notes as it slowly takes on full impactful form and force in song. It’s a magical moment in this film.

“Rocketman” is truly a spectacular musical tribute to an iconic and equally spectacular performer on stage, who sadly had a less than spectacular private life. Fortunately, this entertaining film ends on a triumphant note, just as the real Elton John seems to have finally found happiness and peace after a lifelong soundtrack of tragedy and heartbreak.