Skip to content
You are here:HomeFront ‘Godzilla: King of the Monsters” is god-awful 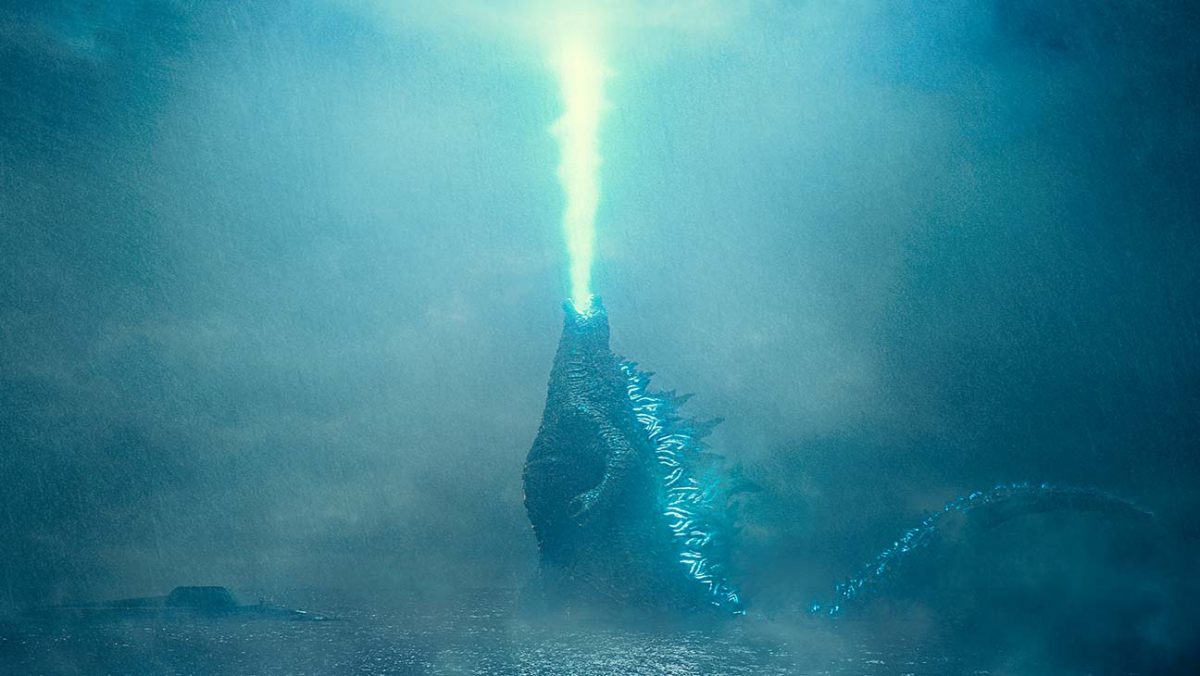 One of the first movies I ever saw as a kid was a film called “Destroy All Monsters”; a cheesy Japanese-made film featuring guys in rubber monster suits playing Godzilla, Ghidorah the Three Headed Monster, Mothra, Rodan and more giant monsters fighting each other and wrecking Tokyo for perhaps the umpteenth time. Seeing these creatures on the screen stomping tiny plastic toy-like buildings like so many fragile grapes held a giddy sense of wonder, fun and excitement for 10-year-old Timmy.

So, it’s no wonder that the new film “Godzilla: King of the Monsters” would hold the same sense of excitement and fulfilled expectations for me. Sadly, I was as numbed and disappointed as watching a Michael Bay marathon of Transformers films with the volume jacked to ear deafening decibels, while expecting Mark Wahlberg to helicopter in and save the day singlehandedly.

Maybe I’ve gotten older and jaded and lost that sense of childlike wonder. Or maybe, just maybe, “Godzilla: King of the Monsters” is just tediously boring, repetitive and ridiculous.

Make no mistake, if you’re a Godzilla fan and like to see monsters smash stuff up “real good”, then this film is tailor made for you. You will love it. Enjoy it with my blessing. Nothing I’m going to write here is going to dissuade you, nor should it.

As simple popcorn entertainment, this film delivers all the empty eye-popping visual CGI calories you can handle. The monsters, or “Titans” as they’re reverently referred to in the film are mostly all here in full glory. The old band has gotten back together for another world smashing tour; including Mothra, King Ghidorah, Rodan, Godzilla and about a dozen other towering lizard-like creatures as backup dancers.

The plot, such that it is ( and does it really matter ? ) tags in a few years after the Gareth Edwards 2014 reboot called “Godzilla”. Michael Dougherty directed and co-wrote this new chapter, opening with the previous film’s destruction of San Francisco when Godzilla battled two other monsters. Now, fast forward five years. The public and government are conflicted about how to handle the new presence of Godzilla and other such “Titans” around the world. Many are calling for their destruction.

However, a well funded scientific organization known as Monarch, headed by research Dr. Ishiro Serizawa (Ken Watanabe) is lobbying for the Titans to be spared, arguing some of them may actually be the protectors of mankind, especially Godzilla.

Meantime, thrown into the mix are estranged couple and scientists Mark Russell (Kyle Chandler) and his wife Emma (Vera Farmiga), who lost their only son in the San Francisco monster fracas. The deadly battle sent Kyle drinking and angry at Godzilla and Emma burying herself in work while keeping custody of their surviving child Madison. (Millie Bobby Brown)

All this time, Emma has been working on a device called the Orca, an electronic device that can calm or enrage the Titans by mimicking the sounds emitted from apex predators. Emma has been testing the device at a Monarch facility that has Mothra in captivity. However, things get dicey when a team of eco-terrorists kidnap Emma, her daughter and the Orca device to awaken and unleash all the existing Titans worldwide. Their motive is to bring about a monster Armageddon that will return the Titans to their rightful place dominating the Earth, while eliminating all the billions of pesky eco-polluting humans around the world.

What follows is an effort by Mark and Dr. Serizawa to save Emma and Madison from the kidnappers, while the military tries to figure out how to control or kill Godzilla.

I could go on detailing the plot, but it’s all pretty much irrelevant because the main draw here isn’t the plot and the holes in it big enough to squeeze King Kong through.

Suffice to say, it all ends up with scenes of monsters destroying literally all the major cities in the world while presumably millions of people are dying off-screen during this global mayhem. Washington D.C. is repeatedly shown as little more than a smoldering cinder of ash.

Eco-terrorism? Washington in flames? Saving the planet … is this a monster film or a political statement?

Meantime, the film’s main event features a face-off between Godzilla and Ghidorah with an undercard match between Mothra and Rodan in the city of Boston.

If you’re a New York Yankees fan, you’ll absolutely love the last half hour of the film as it seems the Red Sox will have to find a new place to play ball following Godzilla and Ghidorah’s titan tango.

Sarcasm aside, the CGI effects in the film are quite good, but awfully dark making the action less visible, and subsequently less enjoyable. There are plenty of fan service nods to the Godzilla faithful; most notably Ken Watanabe’s Dr. Serizawa who; like his counterpart in the original 1954 film, sacrifices himself for the greater good.

However, I just couldn’t get past the plot’s multiple cringe worthy moments ranging from killing off mankind to essentially save the environment, to cavalierly referring to millions, if not billions, of people being crushed and dying simultaneously worldwide while we worry if Mark and Emma will reunite to save their daughter.

Worst of all, seeing the esteemed Japanese actor Ken Watanabe impart some words of wisdom to Mark during one scene of calm; only to follow up by saying he read his wise words off of a Chinese restaurant fortune cookie … really?

As the films’ title suggests, Godzilla, becomes the king – amid the nuclear vaporized ruins of what was once Boston. All hail “The King”.

At least until the inevitable face-off with that other king named “Kong” debuts next spring.

I wonder where the Sox will play until then ?