Skip to content
You are here:HomeFront Review: ‘It: Chapter Two’ 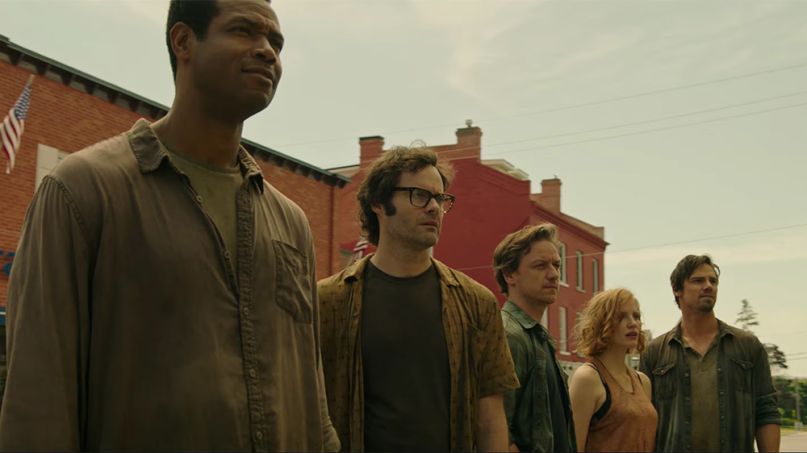 Pennywise the horrific clown is back to terrorize the town of Derry, New Hampshire in “IT: Chapter Two”. However, his reemergence, both in Derry and on the big screen, while disturbingly riveting in parts, overall lacks the horrific impact of its cinematic first chapter from 2017.

Based on Stephen King’s voluminous horror novel from 1986, “IT: Chapter Two” picks up exactly 27-years after the group of children, known as the ‘Losers’ managed to defeat Pennywise by the close of that film. Back then, they each made an oath with to return and fight Pennywise should he ever return to kill the young children of Derry in the future.

However, time and distance does not make the heart nor the memory grow fonder of past childhood traumas. Such is the case with each member of the, now adult, Losers. Each has followed a new path in life. Some are wildly successful such as Ben Hanscomb (Jay Ryan), once a bright sensitive fat kid who had a crush on young, but paternally abused Beverly Marsh (Jessica Chastain). Adult Ben is now slimmer, more handsome, and apparently the head of a large building development corporation.  Wise cracking jokester Richie Tozier (Bill Hader) has retained his humorously snarky ways into adulthood and become a successful, but cynical stand-up comedian. The de facto leader of the young group Bill Denbrough (James McAvoy) has grown professionally into a popular novelist and screenwriter in Hollywood; but with a pesky literary flaw, in that everyone hates the endings to his works.

On the other hand, the outwardly tough but sexually abused by her father Beverly Marsh still has a troubled life as a grown woman.  Marsh is now married to a financially successful man who continues her life of personal dysfunction trapped in a world of spousal domination and domestic violence. All of the once close knit group of children we viewed with triumph and hope at the end of the first film installment, have now lost touch or completely forgotten their mutual friendships as well as the terrifying events they survived at the hands of Pennywise 27 years earlier.

Young smart aleck Eddie Kaspbrak (James Ransone) returns to Derry as a stressed out adult to be taunted by Pennywise for his “dirty little secret” that has some foreshadowing in the film’s opening sequence.

The only member of the young group who hasn’t completely broken free of the bonds of their small town of Derry is Mike Hanlon (Isaiah Mustafa).  For Hanlon, the battle against Pennywise has always stayed fresh in his memory and become his ongoing obsession. Hanlon lives in the attic of the town library, pouring through volumes of books on Derry’s history and the occult; preparing for what he knows is the inevitable return of the evil clown.

Following a brutal hate crime that leads to the grisly death of a young gay man, and a quick succession of new child disappearances, Hanlon calls each his friends to inform them that it’s now time for them to make good on the pact they made as children. All of them realize they recall little or nothing about their battle years earlier. However, once they reconvene in Derry, their memories slowly begin to return about the horrors they once experienced, now buried and hidden away in their psyches.

The only one missing from their initial group is Stanley Uris (Andy Bean), the chronically fearful child from the first film. As an adult, Stanley seems happily married and planning a dream vacation with his wife when he gets the call from Hanlon to join his friends to continue the battle with Pennywise as they all pledged to do. Rather than join his friends, Stanley chooses to kill himself leaving the rest of the group in shock, wondering why he did so.

As each member of the now adult group wrestles with ambivalence and fear to resume their fight against Pennywise, they are also forced to revisit past traumas as memories reemerge. When they finally agree to join forces once again, Pennywise creates new nightmares of imagined and real horror culled from their childhood to defeat and destroy them for good.

“IT: Chapter Two” manages to deliver some genuine shocks and frights under the direction of Eddie Muschietti and screenplay writer Gary Dauberman. However, this installment is severely hobbled by the very thing that made the first film so gripping and entertaining. As each member of the now adult Losers wrestles with their childhood memories and horrors revived by Pennywise; we the audience are reminded via new flashbacks just how amazing the original cast of relatively unknown child actors were in their performances as compared to those of the new cast of seasoned actors playing their adult selves.

Indeed, Bill, the young resilient leader of The Losers has seemed to have lost his mojo via James McAvoy’s listless performance. Equally so, the survivor’s instinct and strength of young Beverly, seems to have lost her way into victimhood and self-doubt as portrayed by Jessica Chastain.

The welcome standout among this group is a brilliant performance by Bill Hader, as Richie Tozier. He seems to be the only genuine character in the film who has convincingly maintained his childhood persona that’s only been honed to often wonderfully new heights of cynical hilarity, common sense fear and ultimate poignancy by the events surrounding he and his friends. Hader delivers his lines (and one-liners) with a skill that makes his character the only one of the group we the audience can truly relate to and root for.

The film’s horror moments are scary enough with a sufficient amount of tension and shock value to be a successful follow-up to the first installment. Though, whether true to the original novel or not, the film’s finale has a sense of overblown reliance on too much CGI enhanced danger, action, and bombast that skirts dangerously close to silliness rather than genuine frights,

A couple of unexpected cameos and a sequence that almost literally mimics another classic horror film provides some surprising moments of humor that shakes up the mix in the film as well.

Overall, “IT: Chapter Two” is a lackluster follow-up to its predecessor that fails to fully recreate the bond of friendship, unity, and childlike resilience that made “IT: Chapter One” so fully formed narratively and chillingly enjoyable.

However, the latest installment is by no means irredeemably terrible nor totally unwatchable. Hader’s performance and those by the original cast of young actors via flashback sequences somewhat blunt the air of mediocrity that pervades this version.

“It: Chapter Two” doesn’t so much float, but rather flounders by comparison as an effective follow-up sequel.